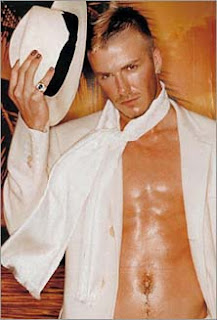 1. Has this as his screensaver: http://images.worldcupblog.org/ecu/beckham5.jpg

2. Repeatedly trashes Posh with lines like, “why does she dress like a hooker from the future?” and, “she’s so spoiled and ungrateful, she gets to be near his big, beautiful balls all day and doesn’t ever look grateful.”

3. When he’s at a bar and someone asks him if he’d like a Becks he looks off into the distance longingly and whispers, “I’d love a Becks, I’d love to have Becks in my mouth.”

4. He buys a sarong. He says sarong is for girlfriend. Girlfriend is never seen with sarong.

5. Whenever someone suggests that Becks’ voice makes him sounds like a gay Mickey Mouse on helium he angrily responds with, “you’d sound funny too if you were a gorgeous footballer. You’re so homophobic it’s shocking. Becks could walk in right now and bounce his big beautiful balls on my face and you’d fucking run because you’re so homophobic.”

6. Announces triumphantly that “Bend it like Beckham” has replaced “A League of Their Own” as his favorite movie.

8. Is considering a second tattoo reading: “VII – II – VI” - to commemorate / commiserate over the day Becks stepped down as captain of the English national team.

9. When Becks is accused of having two extramarital affairs a week apart from each other – one with his former personal assistant and one with an Australian model – he lets it be known that he has information on a third affair. When pressed to reveal his info he repeatedly says, “he’s got enough on his plate right now. We both know how magical it was.”

By the way, I was able to uncover the first draft of that post which is pasted below. Obviously what was published was greatly altered from the original, take a look:

Count me in on the David Beckham bandwagon. In fact, can we throw everyone else off so it’s just me and David on that wagon together? That’s a dream. Just me and Becks in a radio flyer, can you imagine? Give me his gorgeous clothes and manly woman fashion, his lucky ass celebrity friends (can you imagine being neighbors with him? Hello binoculars!), his incomprehensible sex appeal, his incredibly ungrateful, futuristic hooker wife, and ultimately his ability to wake a sleeping giant in this country: my love for another man.

Email ThisBlogThis!Share to TwitterShare to FacebookShare to Pinterest
Labels: Beckham