The Ace of the Staff 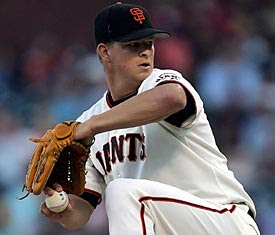 Matt Cain again displayed his ace stuff last night, going 7 innings, scattering 4 hits and striking out 8 in a 3-1 victory for the Giants. He was setting guys up with his slider and mowing them down with his fastball. He dominated seasoned hitters and made grown men look like little leaguers. This guy is the real deal…and he’s only 22.

Let’s dig down into some of his numbers shall we?