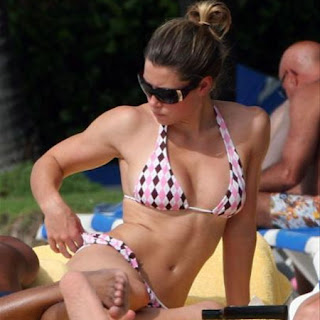 One chick and three NFL notes:

Moustache
Brady Quinn will suck ass in his next preseason game. His numbers were great last time but did you see the actual highlights? He threw three balls that easily could’ve been picked, one of which might’ve gone for six. Also, let’s not forget that he was amped for his first action and that he was playing against the Lions 4th string D. How bad is the lions first team D? Let alone the 4th. He’ll come back to earth next week, in fact, put me down for three picks.

Apple
Vince Young will be fine this year, all of the “Sophomore slump” and “Madden curse” stuff is stupid. By far the dumbest line of the NFL’s preseason is, “defenses have had a year to prepare for him, he won’t sneak up on anybody this year.” It’s Vince Fucking Young! Guys who win rose bowls, get picked 3rd overall in a crazy loaded draft and just win football games don’t sneak up on anybody. Besides football coaches work 26 hour days during the season – if you think they weren’t game planning against him, even when he was on the bench you’re fucking crazy. “He won’t sneak up on anybody this year!” You think halfway through games last year the D coordinator stood up in the booth and yelled “who the fuck is that qb, he’s killing us! I can’t believe he snuck up on us like this!”

Moustache
The Vikings will suck this year, like 3-13, 4-12 suck and everything can be attributed to one simple fact which in essence is the NFL in a microcosm: Brad Childress has a huge ego (all coaches do and kinda have to in order to survive) and admitting that Tarvaris Jackson fucking sucks would mean that he picked the wrong guy. Coaches have a very short life span, and admitting that he should’ve taken Leinart last year or Quinn this year would be suicide. So now Vikings fans, who used to have guys like Culpepper, Cunningham and Moon, are now stuck rooting for Tarvaris Jackson. Sweet! Thanks, Brad!
Posted by Casey Lewis at 4:02 PM

I like to go on record to say I completely disagree with the Jessica Biel comment. That chick is hot.

B. Quinn:
7/11 81 yards 1touchdown 0 interceptions against the Denver Broncos 1st team defense. He also had 1 more touchdown against Dre' Bly ruled incomplete that should have been challenged.

This is a true story: This guy I knew, Luke, was obsessed with Jessica Beil around the year 2004. He talked about her all the time, had a poster of her in his room, she was his screen saver on his laptop, and he even carried a small photo of her in his wallet. He used to try on women's bathing suits and smile at himself in the mirror, saying, "you are so beautiful, Jessica. Look at how beautiful you are." Weird. I watched him do it like ten times.

Then Jessica started to get really popular and mainstream. This was around 2007. She was all over the internet, on TV, MTV was on board...Well, Luke got so pissed that he started to deny that he ever liked her at all. He took down his posters, threw away his laptop, and tore up the photo of her in his wallet....but he did all of this in secret. He was embarrassed by this crush (which he claimed was never a crush at all.)

Early this year he started to deny the whole thing: "I never liked Jessica Beil," he'd say, and then he'd laugh like a maniac. "You thought I liked Beil? No man. I told you, I like veal, the meat. I love veal. This is such a silly misunderstanding."

Of course, this was BS, and I knew it. I was there for all the weird stuff he did back in 2004-2006. But still, Luke kept up with this act. He'd even order veal wherever he went, and wouldn't go to any restaurant that didn't serve it. He carried a picture of a baby cow in his wallet and hung a poster of a beautiful piece of veal that he bought online. It got pretty annoying and I stopped hanging out with him. Lesson: People can get annoying with veal and Beil.