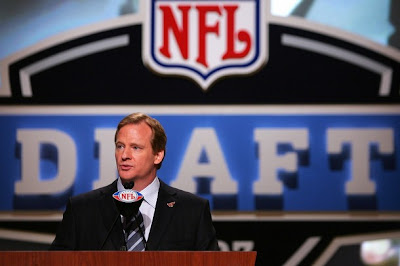 
Speaking of trading quarterbacks, here’s a guy I’m surprised no one has made a move for: Troy Smith. Heisman winner, only 25, played pretty well in the preseason and in mop up duty (in 14 games: 48/89 for 558yd, 3td and 1 pick), showered near Ray Lewis his whole career, knows how to win, and the Ravens only tendered him at the 5th rd level. Troy Smith isn’t worth a 5th rd pick?


Here’s another swap that makes sense: Skins send Jason Campbell to the Bills for Marshawn Lynch. Both former first rounders, both fill an area of need for the other team, both would come fairly cheaply because their teams are dying to get rid of them. I know you’re looking at that and saying that Campbell sucks and the Bills are getting robbed exchanging a 23yr old with two 1,000-yard seasons under his belt for a QB with a Buffalo-sized vagina. Here’s a secret: it’s not Buffalo-sized, it’s actually more like a Japanese Apple pear. In other words, Campbell is a vagina but he’s not nearly as big of a vagina as everyone thinks he is. He threw for 3,600 with 20 and 15 last year. You’re telling me Buffalo has a QB on their roster that can match that next year?


Magglio will kill me for this, I mentioned something similar at a bar six months ago and he’s never let me forget it: out of all the QBs in the draft, Colt McCoy will have the best career. He’s a winner, accurate with the ball, a leader from the minute he stepped on campus, competitive, driven, doesn’t make stupid mistakes, if he ends up in the right system (which should be added to the evaluation of every QB) he could have a Brees-like career. Yes, he’s got a dumb face and yes he’s got a dumb little drawl, but if I’m the Rams, I take one of the big DLs #1, then trade back up into the bottom of rd 1 for Colt.


I have no idea what to make of the Big Ben suspension. On one hand, it’s crazy that he was not convicted or even charged with a crime, yet is being punished by his employer as if he was. Something about that just doesn’t sit right, the idea that your company can have its own set of laws that supersede the government’s. On the other, he definitely raped her, no fucking doubt about it, and he should be punished in some way or another. Six games, about $3 million in salary and the respect of a city that revered him as little as 15 months ago, whether or not you think that's a fitting punishment, is it up to the NFL to dole it out? I really have no idea what to think.


I imagine most of you agree so let me state the obvious: with all due respect to 30 for 30, PTI and Erin Andrews' career, the Gruden QB Camp is the best thing ESPN has done in a long, long time. What a fucking epic hour of TV. I’ve watched it three times and it gets better every time. Magglio and I had a running joke last year that during the third quarter of every MNF game, Gruden would start openly auditioning for the losing team’s coaching job. “If you’re the Cowboys, you have to start thinking about getting Romo a teacher, someone who understands the challenges of the quarterback position.” However, after watching the QB Camp, I realized he’s not auditioning at all, that’s just the way he talks. He doesn’t ask a question to hear the answer, he asks a question to set up his next point. Anyone who ever played football can relate to this on some level. Football coaches just have their own way of talking, their own inflection. Like they’re an annoyed stepfather and we’re their idiot stepchildren. I think we need to go further with Gruden, fuck giving him his own show, give him his own network. We need a Truman Show-like around the clock look at this life.

Gruden: How’s the seafood? It pretty good?
Waiter: Yes, sir. We’re known for it.
Gruden: I don’t want good, you understand me? I want great.
Waiter: Yes sir, it’s great.
Gruden: I have very high expectations. Do you have high expectations?
Waiter: About your order?
Gruden: (pointing at menu) What does this say?
Waiter: Grilled salmon?
Gruden: Do you know what that means?
Waiter: Um…that the salmon is…grilled.
Gruden: People see that on a menu and they think different things. They expect different things, do you understand me?
Waiter: I don’t really know…
Gruden: It better be good, man. Because I’ll find you. You understand? You think I’m riding you, but I see it in your eyes, waiter, I think you can bring me great food. Not good, great. You understand?
Waiter: Wait, are you ordering the salmon?
Gruden: No. I don’t eat food. I photosynthesize like plants.


What do I want the Hawks to do tonight? More than anything, I just hope they don’t get cute. Draft for need, don’t take someone because you can’t believe he’s still there – take the best OT at #6. Take the best DE or S at #14. Don’t trade away the #40 pick in a loaded draft for a QB that hasn’t thrown a professional pass and looks like Duece Bigalow’s gay older brother.


And finally, as the draft enters a new era with this Thursday, Friday, Saturday goat fuck of a schedule, I’d like to thank Roger Goodell one last time for taking a gigantic dump on the West Coast. Thanks, Rog, you fucked up a national holiday. I’m totally raping you in my head right now, how many games do I get for that?