Rambling rants on the third worst team in MLB 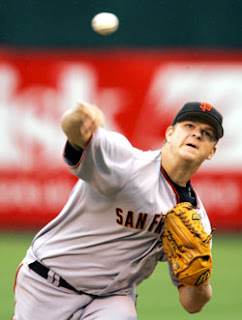 Matt Cain is the unluckiest pitcher in the history of baseball. He has ‘ace’ stuff, he could easily be the number one pitcher on half the teams in the league, but he is getting killed by the Giants lack of hitting. Cain is 4-13. Again, Matt Cain has 4 wins and 13 losses this season. His ERA you ask? 3.77. Yeah. You do the math.

Luck is a HUGE factor in baseball. Especially in a sport when the best player fails over 60% of the time. Pitchers need luck like the rest of them, but for some reason it’s all gone Pete Tong. Er, wait, it’s all gone Matt Cain.

As much as it pains me to say this, Matt Cain should be traded. It’s potentially the only thing that can be done to save his career at this point. Fun fact, in the previous 20 starts Cain has made, the Giants have failed to score at least 3 runs in 15 of those games. He’s only 22 years old, how much can his psyche take? A pitcher’s ego is his lifeline. It’s like a battered woman, the more you put her down and don’t support her, the more likely she’s going to start believing she’s no good. You are good Matt Cain. Your supporting cast just blows.

Blow up the team. Save Lincecum…and maybe Rajai Davis (though the jury is still out) and that’s it. Trade ‘em all. Dump some salaries. Let’s field a Billy Beane team with players who can hit and enjoy playing the game. I’ve had enough of the Pedro Feliz experiment. I’ve had enough of the Rich Aurilla experiment. It’s like that scene in Major League when they realize they had a big name on their roster, Roger Dorn. And then somebody points out that they’re about 4 years too late on the player actually playing up to his big name. Sound familiar? Ryan Klesko? Dave Roberts? Ray Durham? Randy Winn? If this was 2003 we’d be doing some damage. But the Raiders aren’t in the Super Bowl and isn’t fighting for a contract.

What is the point of this post? I have no idea. A place to vent about how shitty the Giants are this season maybe. Give Bochy another shot. No coach should be fired after one season unless of course it’s Dennis Erickson. Let Sabean do what he do…and let’s get back in this thing. Huuuuuuuuum Baby!

Time to be an Angels fan! We'll take Matt Cain.