Five Apples and Moustaches on a Friday 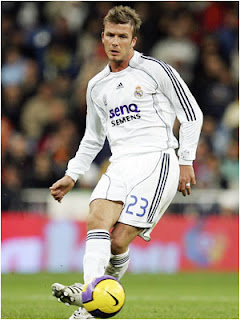 Apple:
Count me in on the David Beckham hype. I’m all-in, in fact. Give me his fashion statements, his celebrity friends, his incomprehensible bank account, his freaky/hot wife, and ultimately his ability to wake a sleeping giant in this country…soccer. Five years ago when the US finished 8th in the World Cup I made the proclamation that the US would win the World Cup in my lifetime. I still stand by that call. Can you imagine the day we win? The rest of the world will go silent and a few hipsters in the Mission will be partying like it’s the second coming. Beckham will bring attention to soccer in this country. Sure, meatheads will still dismiss the sport because it’s slow, there are no commercials and a thrilling game could end in 1-0. But we can’t be the only country who doesn’t “get it”…can we?

Moustache:
Wrinkle is a great word isn’t it? And you almost have to apologize after using it…if used correctly of course.

“Should we put on some Moby?”
“No dude, Moby is such a wrinkle.”

Apple:
I rank the current sports scandals, from order of most fucked to least fucked, as follows:

NBA – Referee Game Fixing
This is huge. This dumb fuck messed with the outcome of potentially hundreds of games including big playoff games. As my friend Brett said to me, they (game fixers) will never get to the players, so ultimately the NBA will recover. But to think that the past 2 years (or more!) have been tampered with by a referee is an unsettling thing. YouTube has some crazy compilations of bad calls this guy made.

MLB – Steroids
This isn’t that big of a deal in my opinion. The entire era (past 7-10 years?) will be recognized as the ‘steroid’ era, but conceivably everyone is in on it. Recognizably, the argument of “everyone else is doing it” isn’t always the best one, but it’s relevant in this situation. How many juiced pitchers have thrown to juiced batters who have been robbed by juiced outfielders? And looking back, who hasn’t used stimulates or drugs to get ahead in baseball? It’s been well documented that amphetamines ran rampant in locker rooms during the 60s and 70s. And if I have to, I’ll always go back to the argument that you still have to hit the baseball. I don’t care how many human growth hormones are pumping through your veins; a 97mph fastball is still a 97mph fastball.

NFL – Criminals
So what? So there are a few bad apples in the bunch. Ok, a lot of bad apples in the bunch. But this doesn’t affect the product on the field. Hell, it may even enhance it. Now, I’m not condoning the cowardly acts of Michael Vick or Pacman Jones, but in terms of the NFL…who cares? The Niners will still play on Sunday, devoid of cheating referees and chemically enhanced performances. Throw out the bad guys and move on. Maybe they could play in Mark Cuban’s new league.

Moustache:
Today’s word of the day is SYCOPHANT (SIGH-ko-phant). Definition: a flattering parasite.

Cool! I want a flattering parasite. Is that like when Britney Spears invites her ugly cousin along for the paparazzi ride to make herself look better? Or is that like when Tara Reid has one of her handlers continue to tell her that everything is ok? I guess we need to look into the origin of the word. Is it Latin? French?

Apple:
My favorite store near my office is called ‘Wok Express’. Don’t let the sign fool you, this really is an emporium of delights. The sign out front states it clearly:

And more? What the fuck else is there? This place is easily the sketchiest place in a 2 block radius. That’s saying a lot in San Francisco. There is no visible kitchen and somehow they constantly have hot fresh food. Casey has a theory that it all runs from a central repository in the heart of Chinatown. Think about it, one place makes massive amounts of Chow Mein and then uses an extensive underground piping system to distribute it to “restaurants” around the city. This could be an entire blog post in itself. Sketchy Chinese restaurants in San Francisco. Tasty.
Posted by Magglio at 1:30 PM

sounds kinda like Jazzy's on Varick in Tribeca. Who could ask for more than a choice of chow mein with a side of corned beef?

The game fixers will never get to the players?

I'd venture a guess that they have already...

I'm sure there are plenty of players out there who gamble as much as Mike Jordan or Charles Barkley...

Once they get into trouble with their bookie, all bets are off. Or maybe they're on.

Cheating and gambling are as old as time itself.

We just don't want to think it's happening because once we determine professional wrestling isn't our preferred pastime, we're looking for competition and not entertainment.

If Barry was not such a wierd asshole the mood around the record chase would be way different. He really fails the attitude test. You are right on when you point out that steriods don't help you hit a ball (the hardest thing to do in sports per Ted Williams. They don't help you have the eye Barry has and perhaps most importantly they don't keep helping you after you stop taking them which he clearly had to have done at least a couple of years ago. Other known juicers have seen marked declines in their performance when they stopped. Barry's decline is only because he is old. He still has the same power and pop. We don't like him but remember that the only thing illegal he is accused of doing is perjury and they can't seem to even make that charge.