There’s Lots of Reasons Not to See Hairspray. Here’s One More. 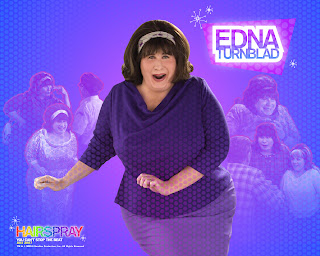 I’ll admit from the start that I’m completely, unabashedly biased when it comes to modern musicals: I absolutely fucking hate them. Annoying, deliberate, over-produced, cheesy, boring; I think the best way to describe the difference between old school musicals (Singin’ In the Rain, The Sound of Music) and new age, modern musicals (Chicago) is that in the old school ones the characters broke out into song because they had to, there was no way to sum up their feelings or explain the situation with words. I realize that sounds cheesy, but it’s 100% true. In modern musicals the songs are big, showy, expensive sequences that exist just to exist not to advance the plot, almost like a special effect. There’s a deliberateness that completely kills the magic, kind of like having a standing, weekly blowjob with your wife. “It’s 10, honey, better spit your gum out.”

Back to Hairspray, if the above wasn’t enough, here’s another valid reason to skip: John Travolta. More specifically, Travolta is playing the Edna Turnblad role made famous by Divine. More specifically still, John Travolta, an outspoken scientologist, a religion that completely shuns homosexuals and disrespects their rights, is playing the role originated by Divine, a famous transvestite performer and hero in the gay community.

What the fuck? Why doesn’t this bother anyone? Why isn’t the gay and lesbian community absolutely outraged by this? How is this okay? If a scientologist can play a transvestite can an anti-Semite play a holocaust survivor? Can a pedophile play a catholic priest (kidding), or a misogynist play a good husband? Shouldn’t there be a common sense screening process for something like this? I mean, Mel Gibson probably shouldn’t play Moses. Michael Jackson probably shouldn’t play the Michael Caine part if they remake The Cider House Rules. John Rocker probably shouldn’t play Bobby Kennedy. But it’s OK for a scientologist to play a transvestite? I just don’t get that.

I realize this could be a gay rights column or a critique of the movie business column or a philosophical column that argues whether or not you can ever really separate the artist from their art, but frankly I’m not smart enough to write either one. But I do know that I fucking hate modern musicals, I’m pissed that no one else is pissed about Travolta being in Divine’s role and I think that if you’re going to bastardize a classic by remaking it you should consider how much worse the bastardizing will be when you cast someone whose beliefs conflict with everything the original role represented. I am now off the Budweiser Hot Seat. Thanks.
Posted by Casey Lewis at 4:49 PM