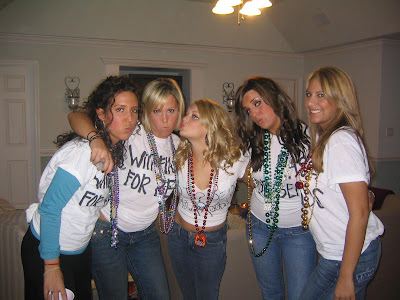 Let me first say to my friend and blogmate …what the hell were you thinking? This is one of the biggest weeks of the year. With Patty’s Day and the NCAA Tournament and Easter and the season finale of Road Rules/Real World Gauntlet 3 (p.s. I hope Frank gets squashed by a gigantic tampon, somehow.) Why in the world would we agree to do a ‘theme’ week where we cover all things underrated? I’m exploding with things I want to talk about. Why narrow what we can do? Why cage the beast? It’s like asking Britney Spears to only dress like a hooker but other than that act completely normal. Don’t we appreciate Britney for the complete crazy package that she is?

So after countless IM conversations, a heated phone call and finally breaking down and crying like a girl over beers last night I agreed to his stupid theme week. So without further ado, here are things that are underrated. (You happy now? Cry baby.)

Most underrated MLB team this season: Devil Rays.
Or now just the Rays. Or the T-Bay D-Rays. I forgot what they’re calling them but they’ve got a solid ball club on their team. They got some kid named Evan Longoria (twin brother to Eva) who scouts are saying could easily drop 40 and 130 this season. Their biggest problem? They play in the AL East. How much would you love to see the D-Rays beat the Yankees and the Red Sox to win the AL East someday? I know I would.

Most underrated Real World/Road Rules contestant, all-time: Derrick.
He’s 5-foot nothing. A hundred and nothing. Sean Austin has nothing on this guy. Why isn’t he a part of the Gauntlet 3? Maybe he’ll make a surprise return on Wednesday night to help the rookie team take home the final challenge. And then he’ll kick CT in the shin and ride off with Diem into the sunset. Until he realizes she’s the ugliest chick on the show these days. Then he returns, smacks Frank in the face with a giant tampon, makes out with Jillian just to crush Frank, then chooses the slimmed down and surprisingly hot Robin. Then they ride off into the sunset together. The End. One can dream right?

Most underrated rant of the day: See below.
You wanna know what's stupid? Party beads. Remember when they were just for Mardi Gras and you only saw them if you were in the Big Easy or watching Girls Gone Wild: Mardis Gras? Now they’re everywhere. I saw some chick last night with 4 or 5 bead strands around her neck carrying a 6-pack of cider and the latest US Weekly. She was wearing, of course, green and white beads. Now what did this bitch do to ‘earn’ those? I’m guessing nothing beyond paying 99 cents at the corner store. You know what? Party beads are the new Hawaiian shirts.

Most underrated NCAA office tournament in the nation: This one.
Stay tuned. Apples & Moustaches is going global.

Most underrated stretch: Bending down and touch your toes.
I do this at least 5 times a day. It feels good. Sometimes I bend my knees slightly for more of a lower back focus. Sometimes I lock the knees so the hamstrings get the love. I like to stay loose and make sure I’m ready to run a 40-yard dash at anytime. Who knows when it will count for real? Am I wrong?

Most underrated article of clothing: Sweatpants.
It’s like a giant pillow for your frontal region.

Most underrated food: Peanut butter.
Look, say what you will. Peanut butter does not get its fair shake. Sure it was immortalized with Resse’s and those little snot nosed Girl Scouts developed the perfect cookie companion…Tagalongs. But when does peanut butter just stand on its on two feet as a solid food choice? I skip the aforementioned treats and go straight to the source. I’m talking a big spoonful. Straight to the dome. You want to talk crazy? Let’s talk crazy.

Email ThisBlogThis!Share to TwitterShare to FacebookShare to Pinterest
Labels: underrated

the chick in the middle of that pic is underrated. she's hot.

The D-Rays will beat the Yankees. Sox all the way in the East though. Oh, and I think that hockey blog is probably the most underrated sports site in the country. With good reason.