Battle of the Blogs 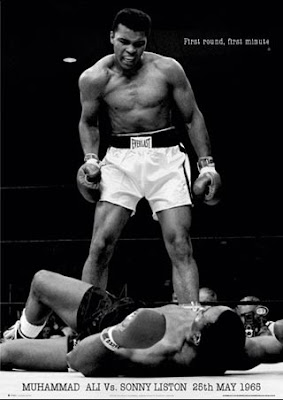 (Deep breath. You’ve done this plenty of times before. Just go with your gut. Never follow your heart. A 12 seed always beats a 5 seed, Gonzaga always chokes and 15th seed American is a real college not an online accredited school. I think.)

This is huge. Every March we plunk down all of our lunch money on office pools trying to get bragging rights as the most knowledgable/luckiest in the NCAA basketball tournament. Truth be told, after roughly 16 years of competing we’ve won a grand total of 3 tournaments. And in one pool the prize was satisfaction. (Yeah…BORING) Anyways, this year is different. We’ve been invited to join a handful of other reputable blogs in a battle royale. A royal rumble of sports authorities online. An opportunity to be crowned the ‘Champion of Blogs.’ Don’t think we’re not bringing our dancing shoes and frat shirts to this party.

Here’s the deal. We’re competing against 5 other blogs:

The Play in CA
A west coast centric blog focused specifically on sports. Not only do they have good insight into Bay Area sports teams but they also seem to have a man crush on Patrick Willis as well. But did they create this shirt on Zazzle? I think not. We did. Moving on.


The Sports Lounge
Don’t be fooled. This site is neither a lounge nor does it have lounge type furniture for lounging. It’s just a website. That covers sports. In depth. But also it’s written by a college student about to take finals. Perfect. Remember Sports Lounge your school work takes precedent over silly grown-up games. Now back to the library!

Bears Necessity
A local blog covering everything Cal sports. Little do they know of our childhood spent watching Russell White run amok against Pac-10 defenses. Plus, University of Washington (Go Dawgs) destroyed the Bears this past season in Berkeley. And Cal's biggest fan is Adam Duritz….sweet. What is it 1992?

Battle of California
A hockey blog. No seriously, hockey. Sweet. Moving on.

Gossip Sports
Written by a chick, this blog covers sports and gossip. Damn it. I wonder if she likes The Hills as much as I do. Probably not because of Heidi Montag’s luscious ta-dang-a-dangs, but still a fan none the less. And she’s from Boston. Perfect. And she’s a chick so she’ll probably get confused and pick teams like the Patriots and the Celtics. Sucker.
What’s at stake? Winner gets to post on each of the other sites for one day. Perfect. We can’t wait to drop Apples & Moustaches all over the blogosphere. Like a fiber fueled bunny after a Thanksgiving feast.

Email ThisBlogThis!Share to TwitterShare to FacebookShare to Pinterest
Labels: Battle of the Blogs

As a writer for The Play in CA and the guy who writes most of the Patrick Willis comments I want to acknowledge your creativity but want to offer a side bet; if we win you have to send me a free t shirt haha. if you guys win the whole thing, I'll buy one and all your writers can autograph it.

who's patrick willis? you hate me now, don't you?

But . . . but the chick from Gossip On Sports has three Master's degrees!

P.S. The Celtics apparently didn't make the cut as I didn't see them in the bracket . . .
P.P.S. Yes, that last part was a joke.

Dudes, you'd better not lose to a hockey blog. That would be like losing to a dance contest to an inanimate object (I dunno, let's say a jar of peanut butter).

Check out the email I just got from Zazzle:

Bitches. Email us at magglioandjericho@hotmail.com if you want to see the shirt we created.

Shoes specially made for losing weight are available today and [B][URL=http://www.mbtplus.com/]mbt shoes sale[/URL][/B] can be quite effective. These shoes have been out for a while and some companies have risen to the top [B]mbt shoes cheap[/B] demonstrated that they can provide a quality product to consumers. One [U]MBT[/U] such type of these shoes is the MBT Shoe made by a company called Swiss Masai. In case you [U][B]footwear etc[/U][/B] did not MBT stands for Masai Barefoot Technology. In this write up we want to take a [U]mbt shoes review[/U] closer look at these special shoes.

The development and idea behind the MBT shoe design is quite [U][B]MBT[/U][/B] interesting. What the shoe attempts to do is structure the shape of the shoe so [U]mbt shoes review[/U] that it simulates walking on sand. Specifically, the they want to attempt to make it as if you are walking [U]mbt sneakers[/U] along the natural sand environment of the Masai in Kenya. Sports trainers have known for quite a while now [U]mbt sneakers[/U] that working out on dry sand is a great way to get in excellent cardiovascular condition. As you [U]discount mbt shoes[/U] walk on sand it creates an uneven surface on your feet and it forces you to shift your center of gravity to [U]mbt shoes clearance[/U] an unnatural position. Your body compensates for this by using several different [B]mbt shoes clearance[/B] muscle groups in your feet, calves, thighs, and torso that you would not use wearing typical shoes. This is the ideas [U]mbt shoes cheap[/U] behind the MBT weight loss shoes and it does seem to [B][URL=http://www.mbtplus.com/]mbt shoes sale[/URL][/B] work for some people.

More specifically, MBT makes several positive claims [U]mbt walking shoes[/U] and benefits from wearing their shoes. They will take muscle groups [U][B]mbt shoes cheap[/U][/B] not normally used in walking and make them active. The shoes will give you a better posture, and a more effective [U][B]mbt shoes clearance[/U][/B] gait when walking with or without the shoes. It can [B]MBT shoes[/B] potentially help you with problems you may have with your back, hips, legs, and feet. The [U][B]mbt sandals[/U][/B] shoes can help you recover from injuries to your [B]mbt shoes best prices[/B] tendons, joints, ligaments, or muscles. The shoes are also designed to alleviate tension and stress [U]MBT[/U] on your lower joints.

Another particular claim [B]mbt sandals[/B] of MBT is that is you walk one mile in these weight [U][B]mbt sandals[/U][/B] loss shoes it will be as if you walked two miles in ordinary shoes, and you will burn equivalent calories. One thing [B]mbt shoes best prices[/B] is for sure, users find that after the first few [B]MBT shoes[/B] times they walk in the shoes their calf and thigh muscles are sore. Also, while you are [U]mbt shoes best prices[/U] just starting to use the shoes they will feel uncomfortable [U]mbt shoes cheap[/U] but that feeling goes away after twenty [U]MBT shoes[/U] minutes or so. Once you get used to the feel of the shoes users find that they can [U][B]mbt shoes sale[/U][/B] walk effortlessly and comfortably. The shape of the sole is designed [U][B]mbt sandals[/U][/B] to make you walk with your back straight and your [B]mbt sandals[/B] stomach flat, and your whole stride shortens up and quickens. These are [U][B]MBT shoes[/U][/B] the major effects that owners of MBT shoes [U][B]mbt shoes sale[/U][/B] experience.