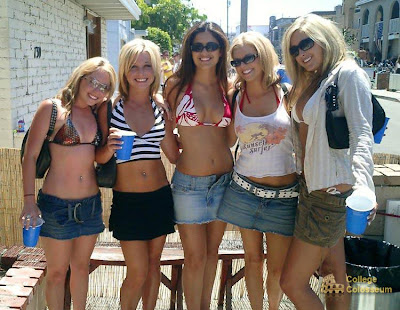 Following the best weekend in all of sports we wanted to provide you with the top 16 moments that stand out in our minds. Of course these started out as just NCAA posts but quickly turned into whatever was on our minds. In no particular order…

1. Stanford’s Brook Lopez is a man among boys. This kid is amazing. He single handily won the game for The Cardinal on Saturday. There was no part of him that would let his team lose. This is the kind of performance that will lift him to a top 10 pick in the upcoming NBA draft. You know what won’t help his twin brother Robin’s draft status? His Krusty the Clown hair. It looks like he has Macy Gray’s dome in a leg lock. But one questions remains, why do they have girl names? Did their parents lose a bet? I can't take them seriously

2. When you hear the statement “hit the glass” do you want to take a phat bong rip? Or is that just me?

3. MLB officially kicks off tonight/tomorrow morning at 3am with and battling in . Reports say the entire Japanese media hangs on the Sox every word and then vacates the premise when it’s time for them to speak with the A’s. Not sure why this is news. It’s called the ‘Associated Press’ or ‘ESPN’ or any of those other coastists fucks who will suck off anything having to do with Boston or New York while ignoring the West Coast. Go A’s.

4. Look, I like OJ Mayo. He's like a cross between Ben Gordon and Tayshaun Prince. But at the same time can someone talk to him about his little mustache? He looks like an accountant, and there's nothing dorkier than a chest-bumping accountant.

5. If they were handing out top seeds for the tournament this weekend, we’d give the nod to UNC, , and . Sorry and . You get a 2 seed. UCLA? Stanford? 3-seeds. You’ve got a tall climb ahead of you.

6. Tickets for SF’s Outside Lands show are on sale this weekend to the general public. But, click on this link if you want to buy tickets now. As far as we can tell only 3-day passes are available. Plus, whose call was it to put Jack Johnson as a headliner above Wilco, Beck and Ben Harper? Bold call.

7. Hey CBS! Way too much Clark Kellog and Billy Packer and not enough Seth Davis and Bill Rafferty.

8. Defense wins championships. We all know this. So who has the best defense right now of the 16 teams remaining? Our bet is on , or . Those teams play smothering in-your-face defense. It’s like a team of Stacey Augmon’s out there. If WSU can somehow make UNC play their style of ball, then they have a shot. Unfortunately I don’t think there’s any chance for the Cougars. Can you believe the spread for this game is only 8?

9. For some reason the other blogs in our ‘ of the Blogs’ challenge are scared to post the results after 2 rounds. We’re not. Here’s how we stand:

Yeah, that’s right. We’re tied for the lead at this point. And tied with a chick none-the-less. We’re not worried about it. Of course, it’s still anyone’s game. Pitt hurt us but we’re banking on big wins from and as well as to choke on their own free throws. We like where we stand. Countdown till Apples and Moustaches take over the universe! (or at least get to offend a whole new crop of readers.)

10. After looking at her recent bikini pics…we came to a startling revelation. Jennifer Aniston is hotter than Angelina Jolie. How the fuck did this happen? This is like waking up one morning and realizing the Monkees were better than the Beatles.

11. Stephen Curry reminds me of Monta Ellis. Quick first step, natural jump shooter, glider rather than a sprinter. He seems like one of those guys that will get drafted in the 20s or 30s, do nothing for the first 2-3 years and then come out of nowhere to be a solid #2 option on a team.

12. We offered resident donkey punch KK the chance to write something for this post…here is what he came up with…:

The first week of March Madness is the most exciting and entertaining week of sports bar none. Last week proved once again why college basketball is the premier sport and why college football is a couple steps behind. March Madness generates so much buzz for not only sports-enthusiasts but also for people who don’t give a shit about sports. What other sport allows you to discuss predictions and analysis with co-workers who are fucking useless when it comes to sports.

And that concludes our KK as a writer experiment. Sorry, buddy, but this isn't show friends, this is show business.

13. Another thing CBS fucks up is having way too much analysis and predictions in the pre and halftime shows and not nearly enough info about the schools themselves. Where the fuck is Davidson? Why does Xavier’s mascot look like it belongs on a frozen fish sticks box? Who did they beat in the regular season, who’s their best player and what kind of defenses and offenses are they susceptible to? Instead we get blanket statements like “ has to make free throws.” Oh really, you think so, doctor?

14. Is there a dumber column to read online than "revised tourney predictions?" Fuck you, man! I'm in last fucking place and so are you, just bend over and take it!

15. By far the stupidest NFL rumor right now is that the Bengals and Cowboys are considering a Chad Johnson trade. How would that work? Ocho Cinco and TO on the same team? That'd be like that show Big Love except with Chloe Seignvy and Gennifer Goodwin replaced by two enormous black guys that can't pronounce vowels.

16. I know Bill Parcells is a genius and a two-time champion and all, but nothing negates greatness faster than bitch tits. Have you see him lately? I keep reading draft articles about what he might do at #1, and I'm reading his quotes and nodding at the screen, but then halfway down they show him standing on the practice field looking like Oprah would look if the lock on her fridge broke. A good friend of mine once said, "you can't be a red neck with a shirt on." Which is amazing, but I'd also like to add "you can't be a genius with bitch tits." Thank you.

Hey, the chick isn't afraid to post her results.

And thanks for the heads-up about Bill Parcells and his bitch tits. There's a Victoria's Secret catalog out there with his name on it, I'm telling you.

we didn't get scared! we just got lazy... (linking all those http addresses is hard work!)