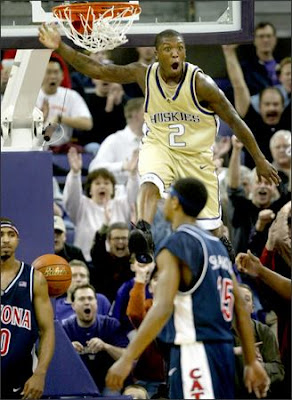 First of all, a special fuck you to once again for his stupid ‘let’s do a theme week’ idea. Talk about a pain in the ass. It’s the first day of the NCAA tournament, let’s talk about who has the hottest cheerleaders (so far I’m thinking ), let’s remember Pittsnogle, let’s talk about where we were when Webber called that fateful timeout (at Dave’s house, making fun of our friend Mike who LOVED that squad). But no, it’s ‘theme’ week so let’s try to squeeze a great post idea into something that can be called ‘underrated.’ It’s about as comfortable as the 1992 towel boy for UNLV was after close games. Not cool , not cool at all.

Today, we hide in conference rooms with select co-workers and gather around a 10” monitor hoping our connection doesn’t cut out at a critical point during the game. We watch without the sound because we don’t want the dumb chicks around us to realize we’re not staring at our computer and working…we’re watching games for fuck’s sake. When it’s a big moment we have to celebrate in complete silence. We plan meetings around games. We make a joke on a conference call about wishing we were seeing the 6 and 11 matchup…1/4 of the people on the call can relate. We exchange updates with other dudes in the hallway who also 'get-it'. We go to longer lunches, eat shitty food and for a few brief moments feel like we were 18 again, watching the games from the comfort of our own couch. But then the bar starts to empty out a bit, it’s 1:30pm, people are returning to their cubicles and we’re left with nothing but a bill to pay for shitty buffalo wings and longing for simpler times.

Am I being a bit melodramatic? Perhaps. But what I wouldn’t give to be back at my friend’s house right now watching Adam Jacobson and Mark Boelter and Walsh Jordan and Dell Demps and Corey Anders (fuck he was so good) and hell, even little Scooter Thompson. Those days were underrated. No doubt about it.