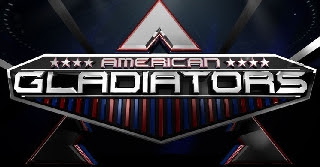 Remember when Hulk Hogan was the baddest dude on the block?

If his ‘comeback’ with the WWE or his reality show on VH1 wasn’t enough, now we have this: Hulk Hogan is hosting American Gladiators. And while on paper this may sound like a match made in heaven it’s actuality a disaster. Instead of smashing skulls and waxing poetic on his opponents, Hulk has been reduced to scripted questions for overacting contestants on the most over produced show on television.

American Gladiators premiered last night after a 12-year hiatus. The show featured a new cast of beefed up Gladiators to compete against mere mortals on challenging physical events. But for all the hype, the show fell short of expectations in last night’s 2-hour premiere.

That’s not to say I didn’t like American Gladiators. It was entertaining at times and the action, though only in 30 second bursts, was intense. The problem with American Gladiators is how overly produced the show is. The beauty in the original show was the integrity of the events, the “everyday” contestants and the Gladiators. The original show felt like it could have been filmed at a local gym with a few local jocks vs. some ex-athletes. Today’s show was like a David Blaine special where the cast of the Real World battled against the BALCO patients we didn’t hear about. And it was all wrapped up with a pretty red bow disguised as Hulk Hogan.

A few observations from last night:

*Hulk’s flat-ironed hair was no better than his ridiculously lame questions to contestants. “Chris, you like strawberry shortcake. What was it like to go against Titan on the Wall?” or my personal favorite: “Brooke, you’re a physical therapist, how did your body feel after taking on Siren in the Joust?”

The dialogue from the contestants was so candy corn and spoon fed it made me nauseous. It was like ‘Date my Mom’ or ‘Next’ on MTV. An actual quote from one of the contestants before an event… “And just like medical school, I’m going straight to the top.” I realize NBC is desperate to have story lines for each contestant but come on, we’re better than that.

Anyone notice how hot the Gladiator Crush is? I’m just saying.

Why do all of the male Gladiators look like women? Are they drug testing on this show? Really Mayhem…eyeliner? Come on dude.

Talk about anti-climatic. On the very first event one of the chicks blew out her knee and couldn’t finish. She ultimately dropped out of the show altogether. Pretty weak. They should have road tested that chick.

Best line of the night was from Hulk, interviewing a chick after the Rings event. “What was it like having her legs around your head?” Pervert.

Like ultimate fighting, the biggest person isn’t always the best. A 5’4” chick defeated a lanky 6’ girl in the final event. Sometimes it’s the chokes and holds that beat the raw strength.

“Beware of Helga!” All of the previews screamed it, the opening introductions of the show ended with the feared Helga and the audience went crazy when she was announced. How did this behemoth of a woman fair in her first event? She got owned by a 5’6” Vietnamese girl who ran right by her. So much for Helga.

Two hours was way too much for the premiere. It was just two shows jammed together. Nothing in the 2nd hour was new or different besides the contestants. They blew their load early if you ask me. Two more hours tonight?

The show did a terrible job of explaining the rules and points and how it all adds up to the final event. They just kinda launched into events and you had to figure out how points were acquired. Less should have been put into the fancy camera angles and smoke machines and more into the audience’s experience.

My favorite part was when one of the male contestants raised his fists to Laila Ali (the other host) in jest and she said “You don’t want to do that.” Damn I wish she woulda knocked his dumbass out.

Do you think Hulk is secretly politicking for Brooke Hogan to be a female Gladiator for next season?

Why can’t we get more background on the Gladiators? Who are these people? Failed atheletes? Ex-bodybuilders? Pedophiliac sickos?

This show will make it. Hell, if a show that's nothing more than a contestant picking numbers of different suitcases can succeed, then surely American Gladiators will. Hulk will survive too unfortunately. In the end you don't even notice he's a part of the show. The real test will be when the contestants are narrowed down to the final 4 or final 2. Will anyone care? Will people rally behind these guys? Will anyone care that the winner gets to come back as a Gladiator next season?

In conclusion, the new American Gladiators was a lot of hype, talk, smoke machines, shit talking, spandex and beefy goodness. Despite its short comings where else can you see gigantic humans battle shit-talking mere mortals? I’m not giving up yet. Especially if Crush keeps on sweating and being all gigantor-hot. You hear me Crush? I’m having fantasies about you gunning me down in Assault. You know what I’m saying?

When will there be guest Gladiators? Like The Rock or Chuck Lidell? That would be sweet.

Great recap of the show, but not scathing enough. I think you're on crack to think this show will survive or thrive. Terrible, terrible, terrible. Who is that awful third guy (not Hogan or Ali) who comments during the events? He's the worst part of the show. I couldn't watch the second hour of episode 1, and I won't watch again. I imagine it will survive the season due to lack of content, but I'll take monkeys choosing briefcases any day...

Hello. This post is likeable, and your blog is very interesting, congratulations :-). I will add in my blogroll =). If possible gives a last there on my site, it is about the CresceNet, I hope you enjoy. The address is http://www.provedorcrescenet.com . A hug.

Hello. This post is likeable, and your blog is very interesting, congratulations :-). I will add in my blogroll =). If possible gives a last there on my site, it is about the CresceNet, I hope you enjoy. The address is http://www.provedorcrescenet.com . A hug.