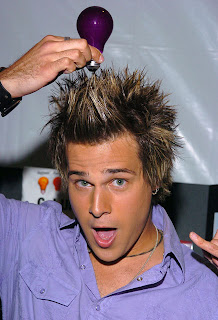 So, you’re all wondering, “how did the pool game go between Jericho and Magglio?”

- Magglio shocked everyone, including himself, by ordering his first martini. Much to my chagrin he said the word “delicious” more than three times.

- We split a pizza and some calamari, both wanted to order something else but were waiting for the other guy to say something, so ended up hungry and angry for the rest of the night.

- One unspoken rule of being a guy: if you’re presented with the option of increasing your beer from 16oz to 23oz for another $2 and turn it down, your buddy gets to jack off on your face in the middle of the bar. Thankfully that deal has never been turned down in the history of the world.

- After dinner, we moved to the pool area and had a frumpy little waitress we named Carmen.

- The music at the bar was unequivocally the worst music in the world. Apparently it was a station on XM called “fat girl crying herself to sleep with Angel’s food cake and the latest Vogue.” It was unbelievably awful. One highlight though, Magglio becoming visibly aroused when a Ryan Cabrera song came on. He tried to pass this off as “you remember him, he was the really weak guy that Ashlee Simpson dated.” One thing he wasn’t able to hide? The pool cue conspicuously jammed up his ass.

- We played 6 games at $2,500 a pop. To hear Magglio tell it, he played better, made better shots and is just a better all around pool player. Lucky for me, I wasn’t able to hear any of this as I was too busy counting the 5 grand I won off his dumb ass.

Was the description of the martini as delicious emitted with either a lisp or an effeminate deliverance?

And speaking of Deliverance were pigs squealing before, during or after the pool cue in the ass?

Enjoy your winnings and the superiority that dominating bar games brings.

FUUUUUUUUCKKK! Fuck. Fucking fuck, dude. I just did my taxes.

By the way, are you guys thinking about making B2B a 4 day weekend? I'm coming down Thursday night so I need you 2 shit heads to start getting in shape. Mkay? Thanks.

One other rule of being a guy: Never make rules that carry a penalty involving jacking off on another guy's face.