A day late, but I’m busy 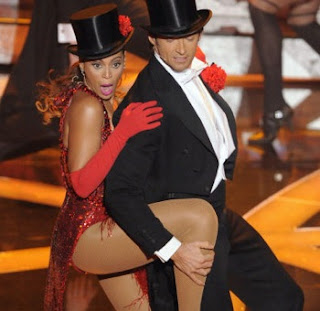 Let’s wrap up Oscar season and put the ’08 movie year to rest. A few thoughts on the show and my updated and final top 10 list.

I know I say this every year, but there’s no doubt that the purpose of the Oscars is to celebrate the Oscars, in no way shape or form are they intended to celebrate the films from that year. This year’s example, all of the best song nominees were only allowed to perform 90 seconds worth of their material, yet they featured a 57-minute tribute to musicals that was about as enjoyable as being the “no, you make sure it stays in, I move him around” guy in a Hugh Hefner sex tape.

Peter Gabriel Question #1: where does Peter Gabriel refusing to perform live in retaliation for the 90-second limit rank on the “who gives a fucking shit” scale?

Peter Gabriel Question #3: when you’re Peter Gabriel and you’re sitting in the stands watching John Legend gently massaging the clitoris of the song you wrote but refused to perform, do you stab yourself in the neck or the leg? I mean, are you limping out of the Kodak or do they carry you out?

Look, I like Sean Penn as much as the next guy, but does he have to be so fucking grandiose about everything? Remember his rambling tribute to Mickey Rourke that started off with “I’m proud to live in a country that elects an elegant man president.” What the fuck is he talking about? Barack is as elegant as Lando Calrissian’s moustache, no fucking doubt about it, but as a preface to Mickey fucking Rourke? Huh? I mean, in a million years could you possibly come up with a rational sentence that started with Barack Obama and ended with Mickey Rourke? Try it. I dare you. It’s not fucking possible. Barack could run Mickey Rourke over in a car on national TV and you still couldn’t come up with that sentence.

Here’s the bigger “why is Sean Penn so grandiose about fucking everything” question: does he do this in his every day life?

For as much posturing as I do about my movie knowledge, there’s just a bunch of shit I don’t understand. For example, how can a movie like Slumdog beat a movie like The Dark Knight in a technical category? When Slumdog wins for sound mixing, is the Academy saying “man, I can’t believe they did that with such a small budget?” or do they actually think that the movie sounded better? That baffles me.

Okay, here’s something that bothers me. The screenwriter and actor for Milk get raucous applause during their speeches – yet the movie doesn’t win best picture. You can’t just make fucking clap noises for something and not vote for it. Not to go all Sean Penn on you and make this a bigger issue, but this is a bigger issue. All the people that were yelling approvingly for gay rights are the same ones that voted against a gay rights movie winning. That’s a little hypocritical, isn’t it? I mean, we elected an elegant man president for Christ fucking sake!

Worst Movie of the Year:
Indiana Jones and The Crystal Cock That Took A Giant Leak on My Legacy
Posted by Casey Lewis at 8:45 PM

You lost me at Pineapple Express.

Tahoe! Wait a goddamn minute, you didn't like Pineapple Express!? The funniest movie of the year by a landslide!

Yeah. I can't explain it. I laughed at some parts, but overall I was left liking MIA and 3rd World Democracy more than the movie. I can't really argue with you on it, I just didn't like it.

We'll talk about it the 3rd weekend in May.

Who knows where to download XRumer 5.0 Palladium?
Help, please. All recommend this program to effectively advertise on the Internet, this is the best program!