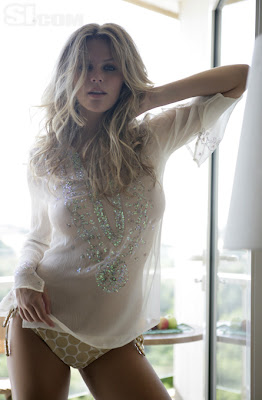 I can’t help it. I know we’re still t-minus 24 hours before pitchers and catchers report to Spring Training but I’m gonna write about baseball. Fuck all ya’ll! (said like Jessica Simpson after she’s piled her buffet plate sky high with fried chicken and turns to find her entire crew, back up singers, manager, etc staring at her with their jaws on the floor. ) That’s right. Fuck all y’all!

The Giants just signed Rich Aurillia. I was alerted of this by a text message from my brother that had not 1, not 2, but precisely 6 exclamation points. What the fuck? It’s Rich Aurillia, sure he put in some good seasons with us in the past but 6 exclamation points? I don’t think so. Save that for when we’ve inked Manny. I told him that Richie Brooklyn is the equivalent of following the fat chick into the bushes. Sure, it makes for a great evening but it’s not something you want to make a habit of. She’s reliable and she sure tries hard. But let’s not go buying her a 2 carat diamond. Am I wrong?

This got us to talking. What’s the chick equivalent of other former Giants? Yes, this is how we pass the time. 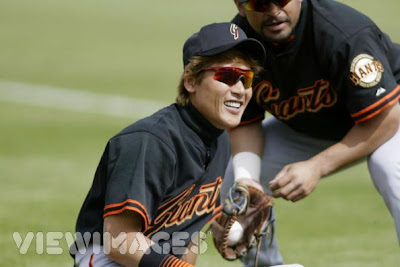 Notable stat with Giants:
In 2002 with Giants, Shinjo became the first Japan-born player to play in the World Series. He went 1 for 6 with 3 strikeouts. Though he could track down any fly ball in the outfield, Shinjo was better known for his stupid hair, his stupid face, his throng of Japanese reporters following his every move and his utter lack of baseball skills.

Girl Equivalent:
Shinjo is the really skinny, really hot, cokehead chick who shows up at the party and everyone is a little scared of. But she's showing some cleavage so you think “ok this could be alright, I guess.” Then 10 minutes later she's doing blow off the toilet seat and freaking everyone out with her 'cutter' stories. 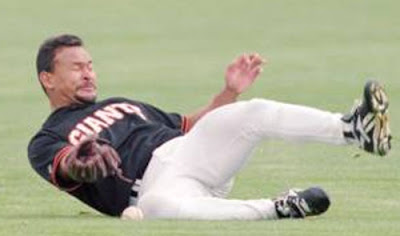 Girl Equivalent:
Marvin Benard is the cuddly bitch that has only had 1 serious boyfriend her entire life. She’s had the same hair style her entire life and is really nice. No, really really nice. Like when people talk about her behind her back the best and the worst thing they have to say about her is how nice she is. You’d trade this bitch any day of the week but the problem is nobody wants her. So you continue draining your bank account on dinners at T.G.I. Fridays so she can get the Chicken Caesar salad because she thinks its low fat and you can drown your misery in the 20 oz happy hour beers while Journey plays over and over and over again. 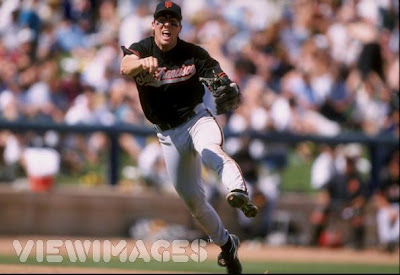 Girl Equivalent:
Billy Mueller is the girl that got away. You almost didn’t realize how great she was until she was gone. You’d get home and she’d have Lasagna on the table and the game already on TV. This would happen every night, just how you liked it. Then, she’d serenade you to sleep with a buff and a blow that could only be described as ‘magical’. Things didn’t work but you can’t quite remember why. Every Christmas you get a holiday card from her and her new family and she looks so happy. Smiling ear-to-ear and you wonder…was she that happy when she was with me? 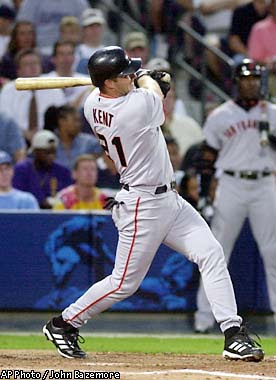 Notable Stat with Giants:
During his MVP season in 2000, Kent batted .334 with 33 HRs and 125 RBIs. He also got into a fist fight with Barry Bonds in the dugout during a game and lied about breaking his wrist while riding his motorcycle.

Girl Equivalent:
Jeff Kent is the older girl who’s been popular as long as you can remember. You actually can’t remember a time when she wasn’t popular. But not popular in like the sexy cheerleader way. No, more like a burly softball chick that drives a Jeep 4x4 and one time beer bonged an entire 40 on a dare. She’s at all the parties and there are always way too many people piled in her Jeep at lunchtime. You want to like her, because everyone else does, but you’d rather just admire from afar. Plus leg hair, even very light leg hair, is not very becoming on a lady. 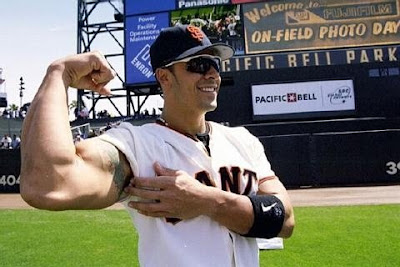 Notable Stat with Giants:
Bobby Estaella either homered or struck out in over 1/3 of his at bats with the Giants. He also had the biggest biceps in the Bay Area since the Bash Bros, Canseco and McGuire.

I would follow Richie B into the bushes any day!!!!!!

Things just haven't been the same since Billy left.

Richie was signed to a MINOR league deal.

Durham's still out there:
http://sports.espn.go.com/mlb/columns/story?columnist=crasnick_jerry&id=3890760

And fucking Dusty Baker started a gimpy range-free Bonds with his Sid Bream arm in the outfield and Shinjo, with his .087 batting average, as DH in the World Series!

That would be like the hottest girl in high school and then you get a friend request on facebook 5 years later and she looks like Courtney Love meets Merton Hanks.

I'm going way out on a limb and predicting Barry rediscovers his groove, Randy (he is so ugly) finds the fountain of youth, Timmy stays the course and doesn't succumb to the sophomore jinx (I know he pitched a little 2 years ago and should be a Junior but he is being held back because he looks so immature) and Buster (who names or nicknames their kid Buster) busts loose and as a result of this perfect baseball storm the Giants finish 2 games over .500.

Look at the time that I wrote this.

I fucking hate the Gigantes. More than Nazis.

Maybe not more than Nazi's.