Is it Friday yet? 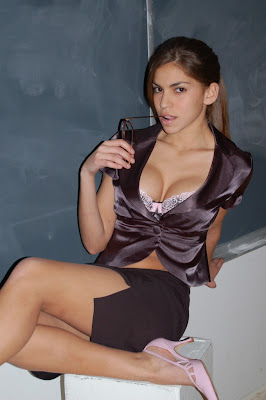 Apple
I’m still pissed about Diablo Cody winning an Academy Award for Best Screenplay. Look, Juno was a good movie. Hell, Juno was a great movie. But best screenplay? No way. There were so many RTs, so much forced teenage dialogue, so many moments where I cringed because that’s just not the way kids talk. I feel like crusty old Academy voters felt like they were finally connecting to a younger generation and assumed the dialogue was ‘just the way the kids talk these days’. So they voted for it. Can you imagine when you tell grandpa something and he replies “serious to blog?”. Yuck. On the other hand, you have to appreciate that Diablo Cody became the first screenwriter to win an Oscar and then have naked pics of her posted on the internet the next day. Glad it was her and not Tony Gilroy.

Side note: That pic is not of Diablo Cody. It's of Antonella Barba, from last season's Amercian Idol. Know your pop culture. Thank you.

Moustache
Drinking at the movies is not only encouraged here at A&M it is strongly recommended. (if you’re 21 or older, of course.) We’re always scouting good movies to bring a little Southern Comfort along. Some previous favorites? Little Miss Sunshine, Because of Winn Dixie (come on, it was Dave Matthews) and Blades of Glory. Next on our radar? Step Brothers. Will Farrell owns this category. We wanted to see Into the Wild but it seemed a bit blasphemous to be getting tanked as we watched a guy starve to death on screen. Unfortunately I went empty handed to see Fred Claus. It would’ve taken at lot more than a pint to make that movie good.

Apple
You know who would fit perfectly into the Niners and Mike Martz’s offense? Colt Brennan. The Niners could draft him in the 5th round, nab Devin Thomas (WR from MSU) in the 1st round and build a team that can actually move the ball. There was a telling point last season when Nate Clemens picked off a pass and the announcers were saying he had to score if the Niners had any chance of winning. He didn’t score on the return. And, not surprisingly, they didn’t win.

Moustache
I’m not watching American Idol, not since AG was voted off. I am watching Project Runway and am not afraid to admit it. I could listen to The Beatles’ all day long. My new apt has a back yard which has and will change my life. My dog only has one eye. I haven’t had a proper drink in 2+ weeks. plays Stanford tonight and it’s not on TV. Is that really how bad the Huskies are? The Giants first spring training game is today. I will pick Tim Lincecum and Matt Cain with my first 2 picks in every Fantasy Baseball league I’m in this year. I landed 2 tickets to see Eddie Vedder in in March. I’ll probably scalp them both. I feel like head butting everyone at work today. And not in a celebratory way.

Something to cheer you up, Magglio....watch "The Hill" video for all the new season shit and shit. Get excited.

I mean "The Hills"

She sat up, unseeing and uncaring of the tatter of clothing hanging from her limbs. Radin, however, turned to face her with a bright smile that showed clean white teeth. A number of prices? He really was afraid. Then she opened her eyes. That spell shouldnt have been so hard. Gala grinned back at Eyrhaen. Just remember what She told you. She raised her hand and knocked. One of Nialdlyes dark brows soared up. Maybe shed broken that too. His hand trailed up her bare arm, causing gooseflesh. Glorious restriction kept her anger safely at bay. What they had this moment was less, but also so much more. Over, he commanded with a light slap to the side of her hip. She collapsed into a gooey, shuddering heap. Do you have time to come speak with me? His demeanor this night was different. His bold words cut through a world of insecurity. He surprised her with a pinch to one nipple, eyes opening as she jumped.