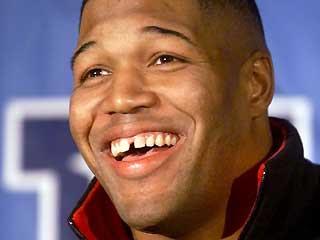 Hey. Guess what? The Super Bowl is Sunday. No, really. Enough of the bullshit hype and the “other Manning’ articles. Let’s settle this shit on the field. Truth be told, we could give a shit who wins. Those coastist fucks back East never care when we’re in a major event so why should we when it’s them. (that sentence made sense in my head.) In a perfect world, both teams would lose. In a perfect world, cameras would catch Giselle giving a squeezer to Gene Upshaw during the 3rd quarter. In a perfect world I’m sitting on a tropical island right now being served drinks by a baboon wearing a toga and laughing about how my millions of Google shares just split again. But it’s not a perfect world. Which means one of those teams is going to win. Shit.

Top 5 reasons why we hope the Patriots lose:

1. Because we won’t have to see Bill Belichick smile. Which is both creepy and awkward.

2. Because it means Mike Vrabel probably didn’t score a touchdown, Tedy Bruschi won’t be joined on the field by his bimbo wife and Randy Moss won’t get a Super Bowl ring.

3. Because as handsome as he is, we just can’t take anymore Tom Brady. It’s true. You’ve had your moment Tom it’s time to ride off into the sunset. We want ’s 4 Super Bowl rings to stay alone at the top. (we don’t count Terry Bradshaw after his partial nudity in the movie ‘Failure to Launch.)

4. Because Matt Cassel has thrown only 38 passes in college and the NFL…COMBINED! He hasn’t earned a ring.

1. Because it means the gap in Michael Strahan’s teeth won't be all over TV, magazines and radio. Yeah, radio too.

3. Because Plaxico’s a whiner, Eli has a labia minora and the no-talent Jason Seahorn is the luckiest guy on the face of the earth. What’s that? Sehorn’s not on the team anymore. Ah, who cares? Fuck him anyways.

4. Because nobody remembers who lost the Super Bowl…think about it…who lost 3 years ago? Exactly. Fuck the Giants. I hope you forget them too.

5. Because it looks like this Johan Santana deal is going to go through. Isn’t that enough for New Yorkers to be excited about this weekend? Do they need much else?

Go back to the part where you acknowledged you saw "Failure to Launch."

I hope you just YouTube'd "Terry Bradshaw's ass" and that's what you ended up with.

Just because you're a trendy vegetarian this month doesn't mean you have to be like Jericho and trek out to the nearest multiplex for chick-flicks like Atonement, Once, Elizabeth, and (I can only assume) Shakespeare in Love.

At least Jericho disguises his love for cinema féminin as a necessary step on his quest to uncover artistic value, no matter how uterine it may be in the end.

Buy yourself some jewelry already and get it out of your system.

The big question now is: will the Patriots be able to sign Randy Moss to a new deal?