10 Thoughts on the Oscars 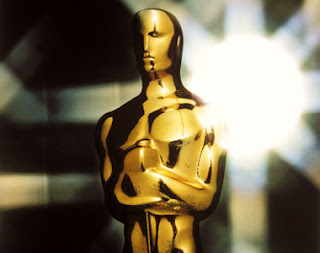 1.
Solid all around show, good opening monologue, good speeches, nothing really memorable but entertaining throughout. Solid B+

2.
Anyone who is calling Actress and Best Supporting Actress upsets hasn’t seen those two performances. La Vie En Rose was just ok, but Marion Cottilard absolutely killed that role, a total 100% transformation. I haven’t seen Away From Her so I’m a bit biased, but I can’t see anyone being better than Cottilard, might be the best performance I saw all year.

Best Supporting Actress is always the most difficult category to call, I was personally pulling for Amy Ryan in Gone Baby Gone, but Tilda Swinton was incredible in Michael Clayton. On a side note, how fucking weird is Tilda Swinton? Seriously. You know how we often refer to great actors as “chameleons?” – well Tilda Swinton is a chameleon… literally. Would anyone be surprised if it was revealed that she lays eggs? Me neither.

3.
I take back my earlier comments about Eddie Vedder not being nominated for best song. After seeing the three whimsical Enchanted songs and the uplifting, touching choir number from August Rush, I don’t think Eddie was robbed at all, he had a good song, a great song, but he was way out of his league last night.

4.
Once! Yes, yes, yes! I honestly yelled out loud when they won. I’m telling you, see this movie please, I don’t ask much. If you rent it and don’t love it Magglio will blow you. I promise.

5.
The most ridiculous thing about the Oscars is how strict they are about the acceptance speeches yet bore us with fifteen minute long montages, a fact that Jon Stewart skewered brilliantly with the binoculars and periscopes skit. You have to love that the Oscars are billed as a night to award the best in film, when really the Oscars are about celebrating the Oscars.

6.
The best part about Diablo Cody is that even though she’s the hot new thing and an Oscar winner, she’ll still blow you for $15. You have to respect that.

7.
Did you know that George Clooney sweats courage and that every time he smiles a child dreams of peace in French even if they don’t speak French? What’s up with his chick? Why does she always look like she’s trying to read a sign that’s too far away?

8.
Do you realize that all of the acting trophies went to foreigners last night? Javier = Spain. Cotillard = France. Swinton = England. Day-Lewis = wherever the fuck he wants.

9.
Really happy with all of the awards last night, some really deserving people won. I would rather have Michael Clayton for screenplay over Juno, and PT over the Coens for directing, but you really can’t complain with how everything worked out. See ya next year.

10.
And just for fun, since we’ve officially wrapped up the movie year, here’s my updated and final top 10 list: