Forgive me for I have sinned 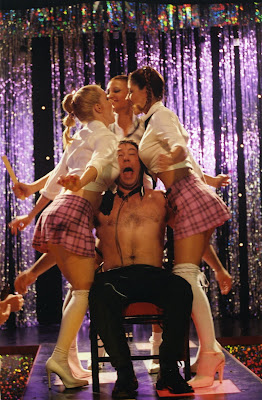 I went to Vegas last weekend. They weren’t kidding. What happens in Vegas definitely should stay in Vegas. The best way to describe my 36 hours in would be this: I treated Vegas like I had never been there and like I was never going back. Translation: I went bat shit crazy. Ten observations from a hedonistic weekend:

1. Every chick who works in Vegas dresses like a stripper. It doesn’t matter if it’s a cocktail waitress, the lady at the concierge desk or the person banging on my door at 9am asking if I want my bed made up. I saw your little outfit through the peephole. Sexy little maid, I know what you were up to.

2. Betting the over/under is the most underrated bet in sports. Full credit goes to who regularly bets over/under lines on Monday Night Football games. I gave it a whirl and spent 2.5 hours Saturday morning doing quick math in my head, chewing through my finger nails and praying shots wouldn’t fall in the Georgia Tech / UCONN game. Though the game was already decided, the last 3 minutes were intense. I wound up winning on the under…one of only a handful of sports bets I would win all weekend.

3. New rule: When in Vegas it is totally acceptable to order the most obnoxious girly drink possible. Not only is this acceptable, it is almost required. We went to The Beatles’ LOVE show at the Mirage on Saturday night. (Side note: Fantastic show. Don’t let the training wheels version from the Grammy’s Sunday sway your thoughts. This was a 2 hour visual mind trip. I highly recommend it.) We decided to grab drinks at the concession stand before the show. EVERYTHING about the drink I ordered was obnoxious. The size, 40oz in a see through cup. The color, bright red. The alcohol, about 6 shots. The price, $20. Needless to say I was comfortably numb for the duration of the performance.

4. I was right. Strippers are way more into chicks then they are into guys. put it best; “it’s because chicks don’t have a giant boner jabbing into them the whole time.” Well said , well said.

5. When you arrive on a Friday night, no matter what time it is, you need to treat it like it’s about 7pm. Get settled in your room, change your clothes, have a pre-drink warm-up, go to a good a dinner and then hit the town. Sure, you’ll end up going to bed around 5 or 6am but hell it’s Vegas…what the fuck else are you going to do?

6. Vegas is not a Vegetarian friendly place. I knew this going in. I wasn’t expecting any great food options, but there were at least 3 restaurants where my only option was the fried cheese sticks or the fried tempura. My fault, I know, my fault.

7. Spotted Frank Thomas at about 3am at a ‘club’. He’s fucking gigantic. One of the larger humans I’ve ever seen. I am positive he could have played professional football and started at the offensive or defensive tackle position.

8. The guy who stands in the bathroom to hand you a towel after you’ve washed up is so prevalent in Vegas they must have their own union. It was shocking. I went to a bathroom that was seriously no bigger than 4 feet square and of course there was a guy in there, casually hanging out, offering me Tic-Tacs after I had done my business. It’s incredible. What a shitty job. Pun intended.

9. Quick hits: for getting blown out by at home. Fuck for losing at and fuck Stanford for only beating by 15. And while we’re at it, fuck the pro-bowl. Anyone who watched the game, let alone bet on it, is a fucking idiot.

So Diary, it was a rousing good time all around. I will never stay on the strip again, the Hard Rock was perfect. We left Vegas at the perfect time and as always I was so glad to be home. I just hope what actually happened in Vegas definitely stays in Vegas.

Email if you want to see pictures.
xoxo,
Magglio

Email ThisBlogThis!Share to TwitterShare to FacebookShare to Pinterest
Labels: vegas

I am a vegetarian stipper who gave a lap dance to Frank Thomas and then put all the money on the under in the Cal Oregon game and celebrated with a drink with a huge umbrella called an "applemoustachetini". Thanks for visiting our fair city.