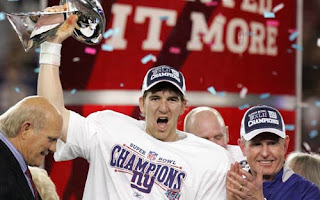 First off, and to state the obvious, what a great Super Bowl, from start to finish a well-played, well-coached game. The kind of game that you completely forget about the pre-game hype, the individual stories, the cities, the money you bet on the Pats and the over (fuck!), and just watch and enjoy.

A few observations / questions about the big game:

1) Tom Brady is a lot more hurt than anyone let on.

He couldn’t throw the ball more than 15 yards, his 5 and 7 step drops looked clumsy, awkward and slow, and he overthrew an open receiver 4-5 times, a sign that his arm was trying to overcompensate for his legs.

2) In the third quarter, Belichick decided to go for it on 4th and 13 rather than attempt a 50 yard field goal. The Pats didn’t get the first down and ended up losing by three.

I was stunned by this decision, it wasn’t wet or windy, the kicker isn’t hurt, points are a premium, why wouldn’t you try and kick the FG? If he misses the Giants get the ball on the 39, if you don’t get the first down they get the ball on the 32 – what’s the difference? 7 yards? Their offense hadn’t done anything, why worry about 7 yards? I did some research this morning and discovered that kickers make 50 yard field goals 36% of the time. Offenses convert 4th and over ten yards 14% of the time. How does Belichick, a guy who knows everything and anything about the game not kick that field goal?

3) Who is more embarrassed by the Giants’ win this morning, Tiki Barber or Jeremy Shockey?

Tiki was the face of franchise for years, he retires, calls out Eli in the press and then the team wins the Super Bowl. Shockey has been Eli’s favorite target for years, so much so in fact, that Eli has admitted that he often makes mistakes trying to force the ball into Shockey’s hands. Shockey breaks his leg and the Giants get hot, really hot. Eli plays the best football of his life and the Giants win the Super Bowl. I think you have to vote Tiki here, especially because he called Eli out while making cookies shaped like Dr. Phil’s head on Good Morning America, but Shockey should sting a little this morning.

(Also, why was Shockey in a box boozing with his buddies rather than on the sidelines cheering on his teammates? Who made that decision? No matter what the answer is, how stupid does this make Shockey look? If he asked to be in the booth, he’s a prick. If the team asked him to be in the booth, so as not to be a distraction, he’s a prick. Have you ever seen this before? One of the team’s best players gets hurt and rather than stand on the sideline and chart plays, tell Eli what he sees, it’s better for the team for him to be in a booth with guys named Anchor and Steel Toe? How can the announcers not mention this?)

4) What exactly was Belichick’s defense scheme for this game?

They barely put pressure on Eli, they didn’t press the receivers at the line, they didn’t overload the run or cut off the underneath passing lanes, they didn’t take away Plax (the whole “take away the best player” thing); what was the plan? When you watch the Pats play you can almost always tell what their scheme is, I had no idea throughout this game, which surprised me a little. And that’s not to say that their D played poorly, they played well but they couldn’t come up with a stop in the final minute.

Overall, pretty disappointing this year, nothing really stood out, I think I laughed twice. Boooooring.

Ultimately, you have to say Brady losing. Everything fell into place for Eli this year, the defense played out of their minds, Jacobs and Plax established themselves as top 10 players, Steve Spagnoulo earned himself a head coaching job. Brady’s hurt but I think this team peaked too early, all of the “one game at a time” rah rah shit, fell short in the playoffs and Eli was the beneficiary.

7) How obnoxious will the Sport Guy’s column be?

After the game, I just wanted to be alone. I didn’t want to talk to my friends or even my Dad, I didn’t want to see the press conferences or Belichick grumble through his first “I just lost a Super Bowl and I can’t f*cking believe it” interview. And that was the most difficult thing to deal with. This season had been about togetherness. That was the greatest part about this team, they brought people together, old friends, new friends, friends of friends, they were like a real world MySpace page. You called people, you emailed people, you ran into people and just nodded at each other because everyone knew that something was happening. When Brady’s last pass fell dead to the ground, kind of like Tony Montana falling into the fountain at the end of Scarface, it wasn’t just the end of the game, it was the end of a family.

And that’s why I wanted to be alone with this one. I took my dog for a walk around the block and before I knew it I was downtown, wandering through a busy street, lights and sounds, but everything seemed oddly quiet, as if the city itself could feel it. I bumped into a homeless man, a guy my wife and I refer to as “Salty Charlie,” because he looks like a Charles in Charge era Scott Baio and always screams racial slurs at people that don’t match their race. I love Salty Charlie. Anyway, I bump into him and after we got through the yelling part, he put his arm around me and said, “son, you’ve got to kill it if you ever want to dream again.” And he was right.

And I slept a dreamless night.
Posted by Casey Lewis at 9:03 AM

My favorite part of the postgame interviews was when Michael Strahan quoted Mike Tyson. He said "everyone's got a plan until you punch them in the mouth." I think this summed it up pretty perfectly. The Giants were all over Brady. Agreed he may have been hurt, but a QB can't function properly if he's constantly on his ass. I can't believe Eli is a Super Bowl champion. I just can't believe it.

Jesus. The Pats took the type of beating that they gave out 18 times before.

That friggin Giants D-line beat the crap out of the Pats.

They certainly earned that. Inconceivable.

Doubtful that this Super Bowl champ, Eli, will be on SNL. There's no way his mom will let him stay up that far past his bedtime.

Here it is: Brady was hurt so he couldn't pass, the Giants D line found even bigger gaps in the Boston o-line than in Strahan's teeth and to quote that well-known football commentator John Travolta in his pregame interview with that well-known gay sports bon vivant Ryan Seacrest in hour 12 of the pregame show just 5 hours before kickoff "the best team in the league was playing the hottest team in the league." Out of the mouths of washed up stars!