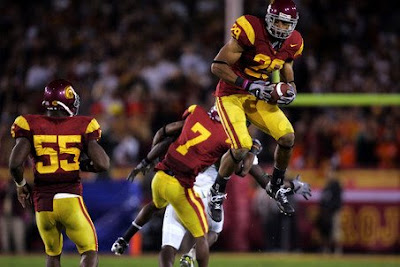 Last night we had the privilege of joining the two sweet dudes from NFL Draft Day Countdown on a podcast. Is that what the kids are calling it these days? A podcast? I call it a phone call that now is posted online for eternity so those pot references I made will someday be used against me by my own children when they want to smoke pot and they’ll be saying ‘but Daddy you were a huge pothead’ and I’ll say ‘go ask your mother.’

I even convinced Jericho to emerge from his hole and join us. Let me just explain something. Besides being a total movie junkie, Jericho lives for the NFL draft. For the past 2 months every IM I get from him is a potential trade between two teams that is so complex it’s hard to follow. I’m sure they make sense. But let’s be honest, I don’t give a shit if Seahawks trade this year’s 3rd and 5th rounder for the Dolphins 2nd rounder in 2011, 4th rounder in 2016 and John David Booty’s soiled jockstrap from the 2007 game versus Minnesota. Yes. This is my life.

Listen here. These guys know their shit. And stay tuned for next week. We’ve been invited back.

Email ThisBlogThis!Share to TwitterShare to FacebookShare to Pinterest
Labels: podcast

Jericho's best line, "Brady... Brody... Whatever the fuck." Of course, I've only listened about a third of the way through so far, but still.

Thank all that is good and holy that the draft is this weekend -- I can't wait for everyone to get on with making their meaningless predictions about next season, which they refuse to do pre-draft. I badly need some NFL shit-talking! This off-season is killing me, and the Giants are not helping. At all.

The seahawks just traded Julian Peterson their best LB for a half decent DL due to "economic" reasons. Paul Allen has enough bank to have made that not happen, what a bunch of horse cock!