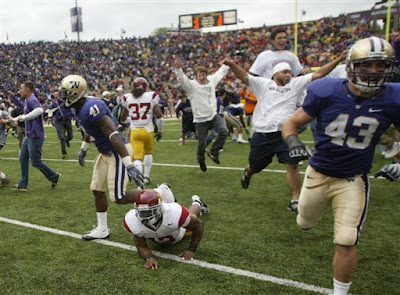 During the championship game I had my laptop going and was glued to the TV. I had the sound turned off because I also had the radio on. You see I could only hear the Texans/Raiders game on the radio because of the damned blackout rule and of course nobody goes to Raiders games. I was drowning in statistics that “championship” Sunday.

As the day progressed, and it became more obvious I was going to pull out the victory, I had the opposite reaction to what you’d expect. I was relieved. Relieved it was finally over. Relieved there’d be no more wishing and praying and scouting and voodoo curses and superstitions and nail biting and profanity laced insults when a meaningless TD is thrown from the 1-yard line instead of handed off like it shoulda been. I mean in the end I wasn’t jumping up and down like you’d expect after winning a championship. I was just tired and happy I could finally relax. It meant fantasy football was finally over.

As a good friend told me, she doesn’t play fantasy football since her dad once told her not to waste karma points on meaningless things, and instead save them up for Steelers games. Perhaps that’s why the Steelers have more Super Bowl championships than any other team.

So as this new fantasy season is upon us I can’t help but be saddled with the same bullshit and meaningless paranoia that I always have. Who should I start? How injured is my player? Are they facing a good defense? Will Jessica Simpson be in the crowd? And on and on and on.

That’s why this Saturday felt so damn good. Football meant nothing but the final score. Watching the Huskies beat USC ranks up there with one of the coolest sports moments I’ve ever witnessed. I had nothing riding on it besides my school’s pride. And you know what? When Locker converted those key 3rd downs on the final drive and set up the winning field goal I was jumping up and down like a fucking lunatic, high-fiving my wife and scaring Patch half to death. It felt so good. I texted till my thumbs went blue. I called my brother and dad. I went to Facebook to see an incredible photo of Dawg fans storming the field. What a great day to be a Husky.

So today I went through my Sunday routine a bit differently. As I watched my fantasy team get decimated for a second straight week, I really could care less. I am still flying high from the Huskies huge upset. Sure, Greg Jennings didn’t catch a pass and it looks like Brandon Jacobs will never score a TD this season, but it didn’t matter.

Email ThisBlogThis!Share to TwitterShare to FacebookShare to Pinterest
Labels: number 24, this is my rick reily moment, tony romo is such a little bitch

Yeah, throwing all my karma towards the Steelers games makes it pretty soul-crushing not to have the distraction of Fantasy Football when games like yesterday's happen. (sniff) Still, I think you might be onto something with your rationale of why they've got six rings! My karma is mighty.