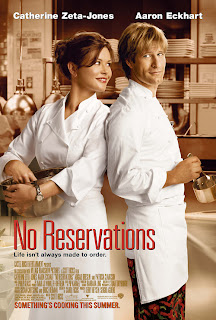 I was originally going to write a long, crass, scathing diatribe about the Catherine Zeta-Jones movie No Reservations. You know, something about how fucking dumb this looks, how the great Aaron Eckhart is being wasted yet again, how I’d rather give Ben Wallace a slow, emotional hand job in the shower than go see this. But honestly, that’s not very interesting and way, way too easy, sort of like seeing Lindsay Lohan’s naked boobs if you’ve got coke at 4am.

(Btw, how fucking dumb is this chick? The most amazing part about her last arrest is that she’s trying to play the, “it wasn’t mine card.” It’s in her fucking pocket! This isn’t junior high, you can’t use the, “Mom, I swear it’s Billy’s” excuse on the police. Christ. This is felony possession of a narcotic not the fucking Parent Trap! Maybe she should’ve said it was the British twin’s coke and not hers. Amazing.).

So anyway, I started to think about all of the reasons why I didn’t want to see No Reservations (there were many) but by far the biggest turn off was the idea of Catherine Zeta-Jones playing an up-and-coming chef. I like CT-Z, she’s talented, has a classic movie star beauty and loves old man penis (which, granted, is weird, but at least gives her a cool characteristic to mention when writing dumb blog posts about someone not that interesting), but I don’t like CT-Z as an up-and-coming anything.

She can play a princess (The Mask of Zorro and it’s sequel Zorro Has To Pay For Melanie’s New Boobs), a smoking hot trophy wife (Traffic, Intolerable Cruelty) or a bitchy actress (America’s Sweethearts, Chicago), possibly better than anyone, which perhaps is the root of the problem. She’s been type-cast as one of those aforementioned roles because of the way she looks, the roles she’s chosen and the pics we see of her in her personal life. Is CT-Z a raving, spoiled princess in real life? I have no idea, but there’s more evidence that points to yes than no and because of that I’ll never buy her as anything but.

Which brings up a larger point: When as a society did we start letting our preconceived notions and our preoccupation with socio-economical status affect our perceptions of art?

Just kidding. I didn’t realize that I had type-casted CT-Z in my mind until I saw the No Reservations trailer and that made me realize all of the different ways that we categorize actors and actresses whether it be for personal reasons, roles they've taken or a combination of both. So without further ado, here are the 7 ways that people can be type-casted.

1.
Type: Special Talent
Definition: someone is so good at something we don’t want them to do anything else.
Example: Joe Pesci and Harey Keitel in tough guy movies, Harrison Ford in action movies, Meg Ryan in romantic comedies.

2.
Type: Very Hot With No Talent Whatsoever
Definition: someone who is really attractive but can’t act and we don’t buy them in any role in which they aren’t the token hot person.
Example: Cameron Diaz in Gangs of New York, Heather Graham in anything that doesn’t have Boogie in the title, all future bad movies starring Jessica Biel, Jessica Alba and Megan Fox.

3.
Type: Talented Assholes
Definition: someone who is type-casted by their behavior or lifestyle outside of their work and it’s impossible to believe them in certain roles.
Example: CT-Z in No Reservations, Gwyneth Paltrow in View From the Top (Gwyneth as a girl who dreamed of becoming a flight attendant so she could go to Paris? Um, no), Russell Crowe in A Good Year (no one wants to watch Russell Crowe find himself…when you throw phones at people the only place people want to see you find yourself is at the bottom of an alligator pit).

4.
Type: Huge Stars in Showy Indie Roles
Definition: a massive star takes a small, high profile part in an “indie” movie and even though they might be great and the movies might be awesome we can’t get past the fact that they’re massive stars and it hurts the performance.
Example: Brad Pitt in Babel, Tom Cruise in Magnolia.

5.
Type: Iconic Characters
Definition: someone plays a career-defining role literally, they create such an indelible character that we always look at them as such and can’t buy them as anyone else.
Example: Sean Connery as Bond, Anthony Hopkins as Hannibal Lecter, Napoleon Dynamite as Napoleon Dynamite, Matthew McConaughey as Wooderson, all future movies with James Gandolfini.

6.
Type: Themselves
Definition: these are people who always seem to be playing themselves, you never think of them as a character, they’re just wearing different clothes and saying different things.
Example: Arnold, Sly, Woody Allen, Denzel Washington.

7.
Type: One Hit Wonders
Definition: someone who absolutely kills their first role and we expect great things from them, but as we realize they aren’t really that talented we just want them to go back and play their first character all over again.
Example: Kate Hudson in Almost Famous, Edward Furlong in Terminator 2, Mark Wahlberg in Boogie Nights, Michael Clarke Duncan in the Green Mile.
Posted by Casey Lewis at 10:32 AM