The 5 worst ideas from EAT IT 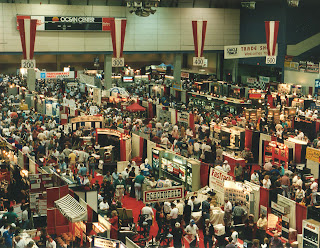 Apples and Moustaches reporter Jericho Royall recently attended the Entrepreneurs Attending Today will Invigorate Tomorrow conference, aka EAT IT, with the hopes of publishing (okay we admit it, partnering with or stealing) some of the best ideas and brightest minds in this space. However, after a few minutes on the floor and the sheer number of awful, awful ideas, Jericho’s mindset changed and this column took on a new life of its own. What follows are the 5 weirdest, most offensive and just plain dumb ideas presented at this year’s EAT IT.

1.
The pitch: A vintage clothing store with pictures and bios of all the previous owners attached to each item.
Jericho’s take: I love vintage clothes as much as the next guy, the key word being “vintage” and not “used.” The key to buying vintage clothes is immediately washing them and hanging them in the closet for a few days before wearing them; that way they look and smell like you and you forget all about the whole “used” thing. When you’re trying on a small, denim, button-up cowboy shirt, with bright red wagons on the back and two lassos over each nipple, the last thing you want to know is who owned and it and what they did while wearing it. I’ve got enough problems.

2.
The pitch: ‘The Baby-sitter’s Club’ books re-imagined and re-written to focus on a group of pedophiles called the ‘The Baby-Splitter’s Club.’
Jericho’s take: By far the creepiest booth of the day, the Splitters set up their entire booth to resemble the back of an ice cream truck. Very surreal. Good Otter Pops though.

3.
The pitch: A casting agency that specifically finds roles for old women to swear in Adam Sandler movies called ‘We’re Fucking Old.’
Jericho’s take: You know how in every Adam Sandler movie there’s a scene where an old woman says a swear word? Along with the kick in the nuts this might be Sandler’s must trusted comedic trick. Well, these folks are trying to capitalize on that by forming a business around placing old women in these roles. The technology is pretty interesting, you grandma or whomever, can actually screen test right over the phone. Seems more like a contest than a business, but who knows? People do love Sandler.

4.
The pitch: A company that combines your favorite historical moment with your most erotic fantasies. You choose your favorite moment and they will re-imagine and re-enact the entire thing as a sexual situation. Couples, singles and swingers are all welcome.
Jericho’s take: Very interesting, but very complex and crazy, crazy expensive. You complete an online profile that details everything from your sexual likes and dislikes to your favorite and least favorite president. They create your sexual scenario or “SexNario” as they have trademarked it, and cast the different roles with actors, people you know, or a combination of both depending on the complexity of the SexNario. I think this is a great idea, but at $20k a pop is really only feasible to a select few. Also, I know they are still in the early stages and all, but there are a few things that are just inexcusable, I mean, why did Helen Keller keep looking back at me, wasn’t she blind? They’ve got too many kinks like that to get my endorsement.

5.
The pitch: The anti-Viagra, a cooling system that was designed to quickly get rid of embarrassing or untimely erections, which they are referring to as “Erectile Exuberance.”
Jericho’s take: Where was this when I was eleven? Here’s the scoop, you wear specially lined underwear that has a cooling system built into the lower bottom. The cooling system connects wirelessly to a watch, so if you ever feel an “iffy stiffy” coming on, you can tap the watch face three times and a blast of cold air will be sent at your testicles. The watch monitors your blood pressure and as soon as levels have returned to normal, or in their words, “the rock is out of your cock,” the cooling system will shut down and go back into hibernation mode. A pretty clever idea, but what’s the demographic for this? And why can't I get this in boxer briefs?
Posted by Casey Lewis at 10:53 AM