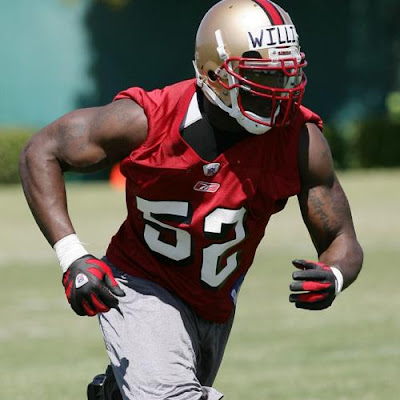 Patrick Willis
We are witnessing greatness. If Patrick Willis doesn’t make the Pro Bowl I will personally show up at Jimmy, Howie and J.B.’s respective houses to hand out some knuckle sandwiches.

Side note: Jimmy, Howie and J.B. have nothing to do with Pro Bowl voting but it sure would feel good to punch those guys.

Tigers…the #1 team in college football
This is the equivalent of going to your 10-year high school reunion and learning that one of your female classmates is now a male. Then watching as he/she dances with your former math teacher and proceeds to make out with said math teacher on the dance floor. Nobody wants to see this shit. Nobody.

Bee Movie
Eh. It was OK. It was equivalent to Cars…good, funny at times, dragged on a bit too long, pretty weak in the end. Like sex in a hot tub. Or any of the Saved by the movies.

Mike Nolan
Anyone who thinks the Niners’ head coach should be fired is out of line. A great stat came up during the game yesterday, the Niners have won their last 5 (now 6) overtime games. This surprised me. They’re terrible in every other category, what makes them succeed in this one? I think you chalk it up to good coaching. The Niners don’t give up. And when it’s close they generally don’t blow it. Will they get blown out and embarrass themselves consistently? Yes. But will they stop trying hard? I don’t think so.

Sean Taylor
This is devastating. Just devastating. A&M’s thoughts go out to ’s family. What a tragedy. And to think he was only 24 years old. I don’t want to judge before the truth comes out…but something doesn’t feel right about this. I don’t know if it was the girlfriend or revenge but I don’t think ’s death is a random act of burglary.

To remember the better times…check this out.