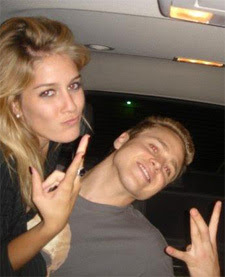 Not the show as a whole but the 3 main guys on the show. If you haven’t had the pleasure of watching these 3 guys in action, well my friends, you just haven’t lived. Brody, Justin-Bobby and Spencer (pictured) are three of the biggest d-bags on the planet. What’s impressive however, is how incredibly weak they all are in their own regards.

Let’s break it down:

Brody –
Terribly handsome. Dumber than Mandy Lynn from America’s Most Smartest Model. And worst of all, absent of any sort of conviction. I realize I sound like an old Jewish woman when I say this, but Brody stands for nothing. He has no real friends. Never has a real opinion about anything. Never says anything of any worth. I swear he spends 80% of his time staring in the mirror practicing his ‘quizzical/pensive/genetically gifted’ stare. He’s my least favorite by far.

Justin-Bobby –
This guy is so impressed with himself it’s incredible. He’s always wearing some sort of homeless head covering and is never listening to what anyone else is saying. Granted, if I had to hang out with Audrina and her dumb friends all day I’d probably tune them out as well. But this guy is different. His favorite words are ‘chill’ ‘mellow’ and ‘chill’. He’s the poser dude who was a skater, prep, jock, band nerd in high school and somehow got stuck in the grunge phase permanently. He’s also always drunk. Which is cool.

Spencer –
I’ve come full circle with this guy. At first, I had to leave the room when he was onscreen. But now he is my favorite part of the show. He is the epitome of The Hills. He’s pointless, useless, chauvinistic and incredibly self-centered. And that’s just describing his facial hair. I think Spencer should have his own show. I think cameras should be stationed in his living room at all times and you should be able to watch regular TV with a picture-in-picture view of Spencer. Could you imagine? Spencer is sitting on the couch. Spencer is reading the comics. Spencer is playing video games. Amazing. Keep on keeping on Spencer.
Posted by Magglio at 5:37 PM

Email ThisBlogThis!Share to TwitterShare to FacebookShare to Pinterest
Labels: a guys perspective, TV

Dudes, You've got it so right. AMAZING show -- largely because of the d-bag-osity of the guys. Frankly, The Hills is the best non-sports programming on tv right now. Timely column. Good job...

I love that you're man enough to admit that you watch The Hills. Excellent analysis.