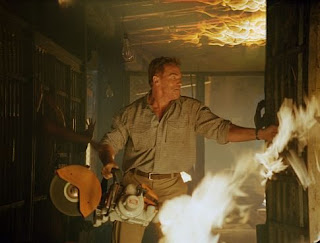 Apple
Have you heard about the all lesbian remake of Beauty and the Beast? It’s called Barbie and the Butch.

Moustache
If you’re Arnold and your state is on fire, don’t you have to offer to personally fight the fire at some point…with your fists? I mean, it’s somewhat reassuring to see Arnold addressing the firemen, comforting the victims, wearing windbreakers. But how much better would you feel if Arnold ripped his shirt off, stared right into the camera and said, “drop me in da middle.” Isn’t he obligated to do this at some point, even if it’s just on a soundstage somewhere?

Russell Crowe is a total enigma to me, how can he be so tough and so weak at the exact same time? Doesn’t that go against the laws of physics? Did you see him in the booth during Monday night football? He’s Russell Crowe, surly, great actor, doesn’t give a shit, but then he’s wearing a hat and has a little pony tail sticking out of the back. What the hell? You know when you take an awesome dump and then have a messy, 30-minute marathon wipe afterwards? That’s Russell Crowe.

2. No Country for Old Men

Coen Brothers. Dark and creepy as hell. Count me in.

Couldn’t be happier that Tom Cruise decided to be in this movie. Have been and still am a huge Cruise fan, even though he has his own sonogram machine, jumps off a 30 foot platform to get into bed and has turned Katie Holmes into a “good looking housewife” action figure. Someone finally talked a little sense into Tom and reminded him of one of Hollywood’s oldest adages: When the public turns against you play a villain. He’ll be perfect in this role. Having Meryl and Redford along for the ride doesn’t hurt either.

Not only is this one of the more amazing books I’ve ever read, but Marc Forster is far and away the most interesting director working today. The thing I love about Forster is that he doesn’t have a set style, he changes with the material, giving each of his films their own unique look and feel (here’s another column dying to be written: who makes better films, directors or writer/directors? Forster weighs heavily into the director argument). Can you believe the same director made Monster’s Ball, the very underrated Stay, Finding Neverland and Stranger than Fiction? Can’t wait to see what he does with the Kite Runner.

At this point I’d pay to see Depp and Burton do just about anything, remake Serendipity, have tea on horseback, talk for an hour about their favorite foot itch remedies, anything.

Moustache
There really is nothing more awkward, in the first few weeks of a job, than walking to the bathroom with someone and then realizing you’re both headed to a stall. Do you talk? Do you try and go really slow so there’s not much noise? Do you clear your throat to cover the sound of farts? There’s really no easy or good way to handle this, you just poop what you have to poop and hope for the best. Fortunately I’m a director now so I can just let it rip, but I feel sorry for the AE next to me, being that quiet must’ve hurt a little.

Apple
Have been watching CNN nonstop since the fires started and just the following headline: President Bush declares that Southern California fires are “sad.” Gee, thanks, George. I wonder if he’ll also add that fire is hot and that marshmallows burn faster than houses.
Posted by Casey Lewis at 11:16 AM