An open letter to Alex Rodriquez 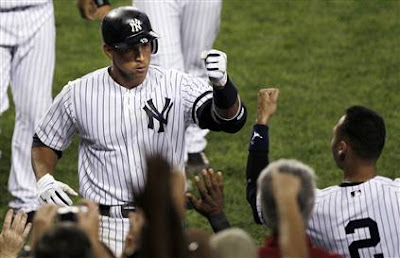 Let me be the first to officially welcome you to the 2007 off-season. Can I offer you a cool beverage or a tasty snack? And while we’re at it have you ever really been to San Francisco? Sure you stopped off this past July for a few days, but did you have time to stop and enjoy the views? Or a chance to walk around The Embarcadero? It’s a nice little place to call home.

Our ball club isn’t too bad either. Sure, we have our share of old timers but we also have some promising young guns too. Ever hear of a guy named Matt Cain or perhaps Tim Lincecum? (I guess you don’t read this blog much. We here at Apples and Moustaches are avid supporters of our young gun slingers.) Well, soon you and the rest of the league will know of their super powers. But I digress. San Francisco is an excellent place to live and an even better place to play ball.

It’s been called the best park in baseball with views of the Bay Bridge and Oakland. On a nice summer day the bleachers are just about the coolest place to be. The place reeks of garlic fries and 1 out of every 5 fans is talking on their cell phone at any given time. But the fans are forgetful, forgivable and damn it if they aren’t loyal. And, sometimes Willie Mays even makes an appearance.

In New York there are tons of celebs and high profile individuals clamoring for the spot of top dog. Hell, you’re not even the most popular person on your team. San Francisco could use a real tried and true male celebrity. Sure, we have Gavin Newsome and don’t get me wrong he’s amazing, but it could be time for some fresh socialite, scene stealing blood. And while Barry Bonds undoubtedly commanded our respect and admiration, he rarely actually set foot in San Francisco.

So come on over Mr. Rodriquez and have a look at what we’re all about. Our salary just got about $18MM lighter and I’m sure Peter Magowan and the boys would be willing to open their pocket books just a little bit more. Did I mention the Folsom Street fair?