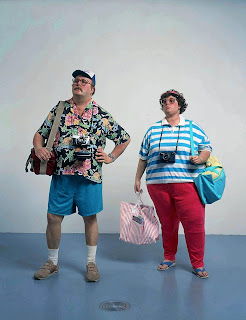 Apple
Have you heard about the new ABC show that's debuting in a few weeks? It’s a dark comedy about women who meet men on the Internet, have full fledged online relationships with them (email, IM and chat rooms only, never actually meeting them), only to discover that they are married in real life. The title: Desperate Mousewives.

Moustache
Have you heard about the new X-rated cartoon that’s premiering on Adult Swim in a few weeks? It’s a take off on Winnie the Pooh Bear, except Winnie has been replaced by a giant, whiney vagina. The Title: Whiney The Goo Bear.

Apple
I owe an apology to my girlfriend, my female friends and every woman I’ve ever made fun of for complaining about how uncomfortable their shoes are or that they can’t walk any farther because their feet hurt. I recently bought my first pair of expensive, obnoxious, uber-hip Italian leather dress shoes and holy fuck my feet hurt. The other night I got off BART and jumped in a cab rather than walk the mile to my house, which is the first time I can ever remember willingly doing that. Damn these man heels.

(I can’t emphasize what a major development this is for a cheap fuck like me. To wit, I was locked out of my apartment once and couldn’t get a hold of anyone I knew, so rather than stay in a motel and call it even, I just walked around all night, going from the bay to the ocean…twice! I was the like the cheap fuck Forrest Gump.)

Unlike some of my fellow residents, I don’t bare you any ill will, I really don’t. I’ve been in your situation before, I’ve been a stranger in a strange city and I hope to do so again soon. I understand I really do. Wear your dumb little shorts and freeze, fold and unfold your dumb little map as many times as you want, shit, I’ll even stop to give you directions. I will, I promise. Just do me this one thing: get the fuck out of the way! Move! Don’t stop in the middle of the fucking sidewalk to look at your map, the sidewalk’s huge, scoot the fuck over. Member how nice this letter started? I’d love to keep it nice but I will knock you the fuck over! I’ve got 15 minutes to get a sandwich and eat a sandwich, I’ll road grade your dumb fucking ass.

Moustache
So Seattle announced a new public transit initiative today, a train that runs from downtown to south lake union. This is a huge step and long, long, long overdue. It’s a great move and one the city will absolutely love. So the city planners, in all their infident wisdom, named the line the South Lake Union Train. Or in other words, SLUT. Are you kidding me? How fucking dumb are these people? Poor Seattlites, they can’t even name a fucking train right.
Posted by Casey Lewis at 4:11 PM

What's funnier about this is Pi Phi's have really been riding this train all along.

They should change the name right away to the Downtown Union municipal bullet Seattle hinterland interconnecting train system.(As I read that it was not at all worth the effort.)

hmmm, you got locked out of your apartment on stanyon and anza. hmm. i remember this.