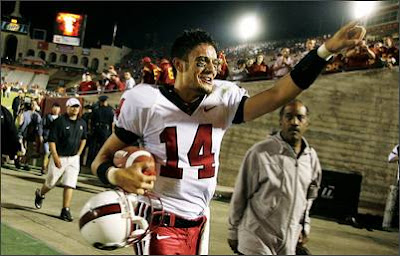 The words will forever haunt the Stanford play-by-play announcer. For the life of me I cannot remember his name but I will never forget his call. Lined up 10 yards from the end zone with just under a minute to play, Stanford faced a 4th and Goal situation. Down by 6 points, Stanford had one final shot at unseating the number 1 team in the country. Now, unless you were touring wine country this weekend or antiquing in Alameda you know the outcome.

The scrawny Stanford quarterback threw up a prayer and “the big guy” answered him. (In case you missed the QB’s post-game interview, it came off like Sunday morning at the White House.) And the announcer screamed at the top of his lungs, “TOUCHDOWN USC!”

The biggest call this announcer will ever make, the biggest upset in college football this season, the defining moment in Stanford football in the new millennium and this guy yells the wrong team name. I was almost as shocked as Rachel was when Ross said her name during his wedding to the British chick.

The craziest part of all is that in today’s technology consumed world, the Stanford announcer’s call will forever be immortalized. Jackass.