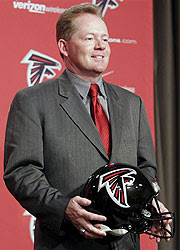 1.
This officially closes the “hire a big name college coach to turn around the franchise” era of professional football. Nick Saban, Steve Spurrier and Petrino went a combined 30-47, each left with over three years left on their deals and each left their teams in much, much worse shape than when they took over (I’m not including Pete Carrol in this group, who, as you know, I’ve theorized will be the coach and GM of the Chargers next year, because he already has head coaching experience in the NFL).

2.
How vindicated does DeAngelo Hall feel right now? Six weeks ago, Petrino was calling Hall out in the media, publicly questioning his commitment to the team, his leadership, his willingness to buy into the system. Well, well, well, Bobby, what do you have to say for yourself now? Would you like to take back any of those comments about commitment? Can you imagine how DeAngelo felt, after all that ruckus, sitting on his couch watching Petrino’s fat face talking about how happy he is to be a part of the Razorback nation? I mean double, no triple fuck you, right?

3.
Can we please put an end to the “let’s feel sorry for Arthur Blank” stories? The guy fucking owns Home Depot, he’s worth billions, so what if his team sucks? Living in the Bay Area has never been more depressing from a football standpoint and I’m supposed to feel bad for this fucking guy? Yes, Vick is a monster and Petrino is a duechebag, but after suffering through 13 Niner games that could be most aptly described as being trapped in a small box with 1,000 flies for three hours, I’m not feeling sorry for anyone. Our team sucks too and you don’t see us crying into our $4,500 pillows do you?

5.
One last thing, Arthur Blank needs to step up and cut Vick. As long as he is any in way associated with the franchise they’ll never completely move on and get out of his shadow. Release him, recoup as much money as you can and cut your fucking losses. The players need a fresh start next year and cutting him right now, don’t wait until the summer and don’t do it ceremoniously, is the only way to let them do that.
Posted by Casey Lewis at 8:50 AM

Every time you book a holiday with Tigervonvon.com. at least 3 days in advance before arrival Thailand, you will get FREE Travel Insurance for whole period of your holiday. www.tigervonvon.com

They should hire Mike Nolan!

Hey, Tigervonvon.com, FUCK YOU! Why don't you pull down my shorts and tiger my von vons you fucking spam piece of giraffe shit. Go fuck yourself and die you pile of yeasty vagina squirt!