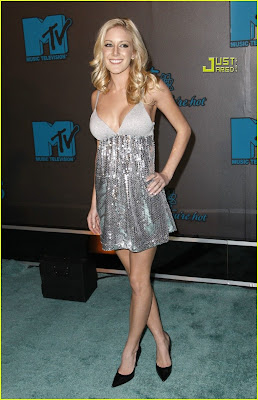 ***Note: When we started this blog, I never wanted to be the guy that blogged about TV shows…recapped exactly what happened….and tried to make witty comments along the way. Then I started watching The Hills.

Let’s get to it. The Hills season finale was last night. Of course, it was just announced they’ll be showing 8 more bonus episodes from Paris…but whatever. In its fake, over produced, awkwardly gawky 15-year-old girl style, MTV put on a two hour extravaganza with the last 30 minutes being the season finale. Two words: skipped it. Well, not the finale of course but the bullshit leading up to the main event. Sure, I slowed the DVR when Audrina was being interviewed (wow she’s dumb), when Brody entered (wow he’s a tool) and when Lauren made her “big entrance”. Her “big entrance” was actually just her stepping up one stair to the platform and the generic overacting hosts acting like it was the second coming for fuck's sake. I think she was actually wearing a sparkled garbage bag. She adds zero benefit to this world. Moving on.

The finale. It felt very unfinale-esque. There wasn’t any big revelation, or break-ups or pregnancy or Brody caught huffing paint cans in the ally with Justin-bobby. It really was just another episode. The best part, as always, was Spencer. Man, it doesn’t get much better than this guy. We’ve now come to refer to the place he resides most often as his “post”. This is basically his couch. Anywhere on the couch. Doing nothing. Actually one time “reading” a book which was as likely as seeing Shaun Hill throw a pass in the NFL. Check it out. Seriously, 95% of the time Spencer is at his post.

Since I mainly waited for Spencer to be on screen so I could laugh at his small mind and square little face I missed everything else that happened in the episode. So, I leave you with the following Xmas gift suggestions for the cast of The Hills.

Lauren:
A personality. Rent Garden State…there’s a reason every guy falls in love with Natalie Portman after seeing this and it’s not cause of her friends, her clothes or where she goes out at night.

Whitney:
A copy of Warrant’s ‘Cherry Pie’ music video. Study this. Learn what makes her sexy. Now flaunt it for God’s sake.

Heidi:
Some new friends, a new dude and a guest role as one of the chicks on Deal or No Deal.

Spencer:
Nothing brah. Just keep on keeping on.

Brody:
A big fat zit on your nose.

That’s all I got.

Email ThisBlogThis!Share to TwitterShare to FacebookShare to Pinterest
Labels: TV

I think this is my favorite post ever. And...I just heard that Kristin might be making an appearance on The Hills. Awww....yeahhhh.

You forgot to get something for 'Britney Canada Whore'. I'm sure Brody already gave her some kind of lovely disease that keeps on giving, but maybe she'd like a nice sweater.