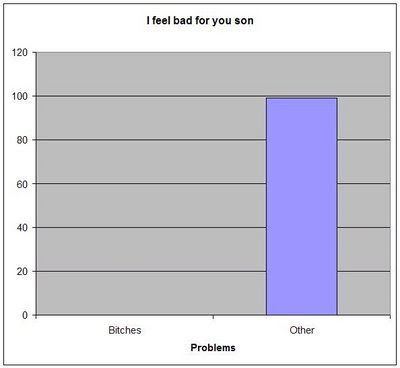 Apple:
Would you rather be really busy at work or have nothing to do? It’s a problem I’ve been dealt with this week as the year is winding down. The obvious answer is nothing to do. But let me tell you, I’m pulling my fucking hair out. I’ve resorted to crop dusting the new girl, making my foot fall asleep then trying to walk up a flight of stairs, and IMing Jericho to see who can come up with the most disgusting bedroom scenario involving a Santa hat and a Cup O’Noodles. (I’m winning FYI) Hell yesterday I snuck in a 15-minute nap downstairs and nobody knew. Is it Xmas yet?

Moustache:
Two sites worth mentioning today, both from friends of A&M:

*The first is called Mister Product and it’s a shopping blog. Mister Product finds cool things on-line and tells us about them...it's that simple. The dude behind it is David Beach. A renaissance man in the world of Web 2.0. I know this much, when he’s talking I’m listening.

*The second is The Champagne Bubble. This blog is brand spanking new only having kicked off on Monday. But it’s been a long time coming. Miss L offers a chestier approach to the world of pop culture, man meat and drunken excursions. Give it a shot. This bitch knows what’s up.

Apple:
I can’t stop listening to Jose Gonzalez. Fantastic stuff. His minimalist guitar work and tribal melodies are hitting hard these days. Something you must know about me, when I like music I don’t mess around, I digest it like I’m Ryan Gosling trying to get fired from a movie. I’ll ravish a new artist like I’m a Spears sister on a first date. And right now, Jose Gonzalez is my 19-year-old stud and I’m an innocent 16-year-old southern bell. Bring it Jose. I’m wide open.

Moustache:
Let’s get one thing straight; this whole Jessica Simpson cursed the Cowboys thing is a load of crap. First or all, as I mentioned earlier, is bored. They’re coasting until they get into the playoffs. Secondly, it’s a complete coincidence that Romo plays shitty when Simpson or Carrie Underwood is in attendance. Anyone considered the fact that Romo isn’t great at putting together a complete season? Remember last year when he shit the bed down the stretch? There is one reason this has become a big story…the NFL is pushing hard to build its female audience. Expanding globally is important (as evident with preseason games in and ) but the female population is just as important. And what better way to promote football to females than with an US Weekly beauty queen attending a game in a pink fitted Romo jersey? (Available now for a limited time at nfl.com) We at A&M are not buying it, not one bit. You want to talk chicks and football let’s discuss Brenda Warner, Jennifer Walcott or Pam Oliver.

Crop Dusting the new girl?! I want your life. Thanks for the shout out. Now all I need is to not fall prey to Romo-like performance anxiety (Yup, still blaming Simpson).