5 Quick Thoughts on the Best Game of The Year 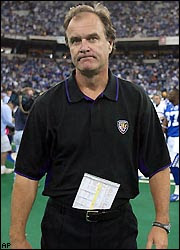 1.
I realize I’ve said this 1,000 times on this blog, but in my opinion it can’t be said enough: Thank God for Ray Lewis. Seriously. Did you see his pregame speech to Reed and McGahee about Sean Taylor? Holy shit. I hope he never retires, and if he does, he should become a head coach immediately after. Honestly, who does a team play harder for, someone like Andy Reid, who knows everything about everything, or someone like Ray Lewis, who fucking feels it with every inch of his body? No contest, right? The Ravens can keep Billick to run the offense and make in-game decisions, keep Ryan to run the D and have Ray speak to the players and argue w/ the refs, you’re telling me Ray doesn’t win 12 games as a head coach?

2.
Speaking of Billick, who is Billick? What’s his philosophy? Do you notice how the Ravens have absolutely no identity on offense? He’s an offensive coach, right? Think about it, Shanahan runs the ball with zone blocking to set up the play action and naked bootleg; Holmgren uses the 3 and 5 step drop to throw the quick out to set up the run; Norv Turner uses head coaching jobs to audition for offensive coordinator jobs; what does Billick do? Is there ever a time during a Ravens game when you say, “now, that’s a Billick-type drive?” Never, right? I don’t get it.

3.
The defensive holding call on that fourth down was absolute shit and the Ravens have every right to feel they got screwed. (Bravo to Bart Scott for chucking the flag into the stands like that, not sure I’ve ever seen that before, well done.) Here’s the thing, tight ends get mauled by safeties on every play, not just some plays, every play and the defensive hold gets called maybe 5% of the time. I’m fine with throwing the flag in the first quarter, but on fourth down in the final seconds? Fuck no. You never want to see a game decided by a cheap foul in any sport. The Ravens deserved to win that game.

4.
The only way I can see to beat the Pats is with a power running game, taking a few deep shots (particularly against Hobbs and Harrison – I wouldn’t go anywhere near Asante, that guy’s a fucking octopus), roughing up the receivers at the line (Moss and Stallworth are both pussies and Welker is 4 feet tall), and bringing heat on every play. Easier said than done right? The Steelers next week have the best chance, there’s no way the Jets, Dolphins or Giants can do any of the above, if NE wins next week, they go 16-0.

5.
The other side of this coin is that teams have to stay aggressive at all times. Last night, the Ravens had the ball with a 7 point lead and 10 minutes left; one run and two horrible Boller throws later and they’re punting. Obviously, the Pats get 3 to cut the lead to 4. Ravens get the ball back with 6 minutes left, a few straight ahead runs and they’re punting again. The old, “play good defense, run down the clock” routine does not work against this offense, to beat the Pats you have to play like you’re ten points behind at all times, because you are.
Posted by Casey Lewis at 9:14 AM