Five Quick Thoughts on the Impending Doom of the Mitchell Report 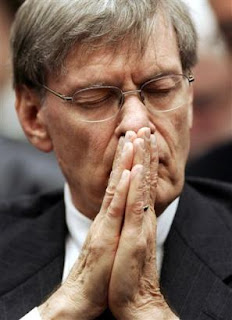 1.
I fucking hate baseball, I think I need to make that point before I dive in, so take this post with a grain of salt, in fact take this grain of salt and inject it into Rafael Palmeiro’s ass.

2.
Speaking of Rafael Palmeiro’s ass, isn’t that the stupidest, weirdest and most ridiculous part about taking steroids? If you’re Mark McGwire don’t you turn to Victor Conte or whoever your dealer was and say, “look, I’m Mark Fucking McGwire, I’m worth $100 million, can’t you figure out a way for me to take steroids that doesn’t involve being pantless in a stall with Rafael Palmeiro? Can’t you make a Power Bar or a shake or something, I really have to bend over in front of Jose Canseco once a week and say, “OK, Jose, fill me up?”

3.
Here’s the early report from ESPN about the Mitchell findings:

Major League Baseball and the Players Association share the blame for tolerating a widespread culture of drug abuse, George Mitchell's report on doping in baseball says, according to two lawyers who said they are familiar with the report.

4.
The good news for baseball? At least you have Bud Selig to lead you through this crisis. I mean his face emits intelligence and inspires confidence and calm. When you look at Bud Selig you think, “now here’s a man that does nothing but think, eat, fart and sleep baseball, he loves the game, he’ll see us through.” In other news, did you know that “Weekend at Bernie’s” has been remade as “16 years as Baseball Commissioner?” I mean, I’d never insult an important, powerful man by insinuating that he looks, walks and talks like a corpse, but don’t you get the sense that Bud Selig has been auditioning for 16 years to be in a remake of the Thriller video?

5.
The next few weeks will be flooded with terms like, “standard of fairness,” “Hall of Fame candidacy,” “the court of public opinion.” But honestly, if the report does not also include terms like “head size,” “backne,” “shrinkage” and “Brett Boone coming out of nowhere to hit 40 home runs in one year” then we might as well shove the entire thing up Rafael Palmeiro’s ass and start over.
Posted by Casey Lewis at 8:32 AM

I hope they finally blast Roger Clemens for steroids. I'm also hoping A-Fraud makes the list to make the Yankees look like idiots for resigning him.