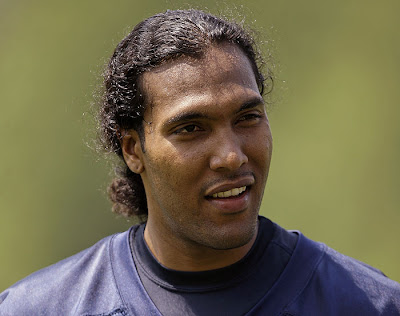 Our favorite fuckhole was interviewed on Sirius yesterday, here are a few highlights:

On his role in the offense last year:
"I don’t feel like last year, I wasn’t a priority in the game plan and I was almost so much told that last year. That’s just not how it’s gonna be."

Correct me if I'm wrong here, but is that the world's first quadruple negative? Wow, so if you're ranking Housh's skills in reverse order, they'd look like this:

By the way, when you look up the word "redundant" in the dictionary the definition is: "fuck you, Housh, you pussy wipe." And yes, everything in my dictionary says that.

On how he'll avoid the same struggles he had last year:
"That’s just not how it’s gonna be. And so I believe this year it’s gonna be one of those things where, T.J., you’re gonna have to show us that you can carry the load or you’re not going to carry the load."