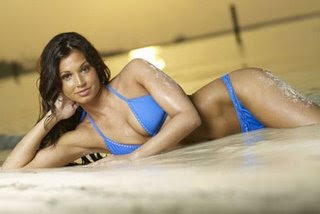 Ten thoughts about the most dramatic Bachelor ceremony yet…

1. The Bachelor is such a big fat fucking puss. We set the over/under for number of times Jason Meznick would cry at 3. This was surpassed within the first 30 minutes. It all makes sense now that his son Ty is such a wet noodle. Nice role model dad!


2. What the fuck was Deanna wearing? Really Deanna? This is what you chose to wear to get your man back? She waddled in wearing an interview suit and a puffy jacket. We set the over/under for total amount of weight she’s gained at 20lbs. It’s gonna be a close one. Stay tuned.


3. Anyone realize that they never had a “friend” episode? Think about it. Where was the episode where the girl’s best friends show up and waive their single tits in the Bachelor’s face? And what about the episode where Jason’s friends come over to the house and make inappropriate comments about each chick's child bearing hips.


4. Don’t you feel like the real reason Melissa and Jason weren’t right for each other was because she hit him? Frequently. And he just couldn’t take it any more.


5. It has to be said. The clip of The Bachelor stumbling around on his balcony and collapsing into uncontrollable sobs might quite possibly be the most amazing moment in bachelor history. Do you think he watches now, turns to his friends, and says ‘oh man they sure make me look like a flaming labia’ or do you think he turns to his friends and says “it really was heart wrenching…and it rocked me to the core.”


6. At any point, when Jason kept referencing that he had feelings for 2 women and didn’t know what to do, did the producers consider a 3-way? Not even a wedding. Just like a soft core 3-way. Maybe we could even get Chris to narrate.


7. Three words: Fuck US Weekly. Seriously. They ruined the fucking show. If you didn’t know about the twist at the end then I wonder what it must’ve been like to witness. But the fact that a major magazine reports the ending 5 days before it’s shown is just bullshit. I don’t care if it was staged. I mean really, are we looking for integrity in The Bachelor? I’m more pissed that US Weekly ruined it. Consider my subscription cancelled.*


8. I’ll say one thing…the stabbin' cabin they hooked him up with was pretty sweet. We set the over/under for the number of piledrivers delivered at 3.5. This was easily surpassed after the first hour.


9. What the fuck was up with the chick’s dresses and hair for the final rose ceremony? Now I know that this makes me sound like a total chick (wouldn’t be the first time) but seriously. What the fuck were they thinking? Melissa had some bullshit Princess Leia hair and Molly looked like she was going to junior prom circa 1987.


10. After all is said and done, Jason Meznick comes off looking like a gigantic dick head. And I’m left counting down the days until the next ‘most dramatic rose ceremony yet.’

*I’m just kidding. I was angry. I didn’t mean what I just said. Can you forgive me?

Email ThisBlogThis!Share to TwitterShare to FacebookShare to Pinterest
Labels: did you catch the cover of espn the magazine, please dont sign warner, trade cutler to the niners

Oh man. My favorite A & M post EVER. You really hit the nail on the head with this one, Mags. And I really hope that Jason gets a nail in his head.

Is it just me or is it getting femmy in here?

You summed it up perfectly. I especially enjoyed your comments about how bad the women looked. Melissa's hair and Molly's dress were awful. Deanna looked especially frumpy as well.

Not sure what all the pissiness is for, You call JAson out for being a puss but it sounds like you are the biggest puss bag whiner ever, I mean seriously, my wife doesn't even get this worked up about the show and she's a woman. In defense of Jason, he's got a kid and that brings a whole other element into the mix, the decision's a bit bigger, now let's mix in some Rock of LOve Bus for the masses!

Rock of Love Bus! That is way more my speed!

Whoa, whoa, whoa, guys, what's with all the vitriol? This isn't a blog for guys who want to read about guy stuff, this is a sensitive blog, for weepers, poets and misunderstood miscreants. Do your thing, Magglio, keep menstruating.

(P.S. Magglio, stop being such a flaming puss wad.)

I believe I called DeAnna "Frumplestilkskin" last night. How she ever was in the position to take her pick of 25 losers is beyond me. Anyone else notice her struggle to get out of the limo like an overweight granny with a wedgie?
And for anyone else out there who decided to make "how many times can jason cry" into a drinking game, I feel your pain right now.

LOL @ "the most dramatic rose ceremony yet" - as usual. Great post...reminded me that I will never watch The Bachelor ever again because it has wasted my time for the past 4 seasons that I've been following. The couples end up breaking up and I end up thinking 'all those hours I sat in front of the television: wasted'. Great post. ;)