Box Office 5/30/08: Indy Jones and The Eternal Quest to Figure Out What These Bitches Are So Upset About 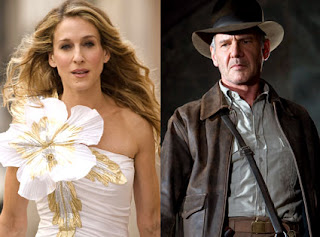 
The big question this week is whether or not Indy’s second week (which I’m guessing will ease about 40% from last week – most blockbusters ease about 50-55% during their 2nd week, but I think Indy will be the exception to this rule) can top SATC’s debut. SATC is a tough one to predict, there really is no precedent, it’s not really a romantic comedy, not really a drama, not really anything someone with testicles should see on the opening weekend (look, I’m fine if dudes want to see this, I’ve watched the show and have professed my admiration for it, but guys can’t see this movie on opening weekend, they should be required to put that on the bottom of the poster like a surgeon’s general’s warning on cigarettes.)

Anyway, there really is no way to research this so I’m going on gut instinct. I think it’ll open big, but not as big as everyone thinks (have heard some people predicting a 9 figure opening which is crazy to me). Honestly, 55 is my best guess, I can see this movie going anywhere between 40-80. Here’s an interesting wrinkle, do gals want to see SATC during the day? Doesn’t it seem like an event movie? Get dressed up, go out to drinks, talk through your vaginas for 2 hours about whatever the fuck vaginas talk about and then head to the movie? Is this something girls will see at 2pm on a Sunday? I don’t know, it doesn’t feel that way, which would massively dent the box office for this.

So I think Indy whips those hookers. Not badly, but I think when everything’s added up we’re going to see Indy win by a nose.
Posted by Casey Lewis at 1:00 PM

I hate to argue with the master but Jericho, I beg to differ. I think SATC is going to be #1 at the box office this weekend. Chicks will totally see it during the day. My friends and I are going to brunch on Sunday and then to the movie. So there.

I just went to buy tickets to SATC in Sacramento and all the 7:00 shows are sold out. Still standing by your prediction??