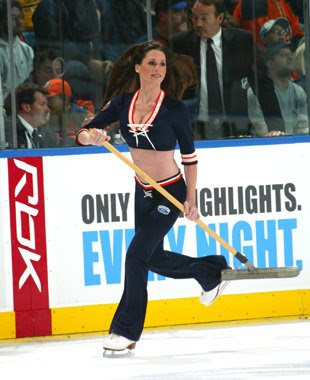 I’ll watch any professional football, baseball or basketball game. At any time. This weekend I even found myself watching the Pepperdine vs. Penn St men’s volleyball championship. Super gay? Yes. But entertaining? Absolutely. As I write this I’m watching the NFL Network’s replay of Cincy vs. Pittsburgh from week 7 of last season. (Side note: if you don’t have the NFL Network you have NO idea what you’re missing. They shrink the games down to an hour and a half and have shows like ‘The 10 best comebacks in NFL history. Or, The 10 best NFL drafts. Did you know the Steelers drafted 4 hall-of-famers in 1973? Why do I get the feeling Kentwan Balmer and the gang aren’t Canton bound? Call Comcast, now. It’s only like $4 extra a month. Trust me.)


I like watching sports. Wait a minute, I love watching sports. I love the competition. I love the theatrics and I love the intensity. But I have standards mind you. I don’t watch women’s basketball. I just can’t do it. Nothing they do on the court is extraordinary. I don’t watch cricket either, mostly cause I don’t understand it. Cage fighting, Arena football, strongman competitions and cheerleading are not sports. So I pass on those. Hockey is no different. I have vehemently revolted against watching hockey. It’s lame. It’s weird. And it’s Canadian. I can’t tell you the last time I actually sat down to watch a hockey game.


But last night was different.


Let me set the scene. Let’s rewind to Friday night. The Sharks just beat Dallas in overtime to force a game 6. The series is now 3-2 in favor of Dallas. (For the chicks and non-hockey fans out there, it’s a 7 game series so first to win 4 advances.) This means a crucial game 6…another do or die game for San Jose. How do I know all this? Because I stay on top of sports in general. And Friday night I find myself enjoying a few cocktails with Kendall and Audra, who are surprisingly big time Sharks fans. I won’t hold it against them. They have their reasons. Kendall is family friends with the GM and Audra used to make out with one of the players. Regardless, they’re hyping up Sharks hockey. So I listen. I humor them for a bit. And then I turn the corner. Call it ‘too much whisky’ or call it ‘I’ve got nothing else to do Sunday night’ but I decided then and there I would watch game 6.


Riveting. Painful. Gritty. Intense. It was insane. It was the best (and only) hockey game I’ve ever seen in my life. The game went into 4 OTs. The Sharks ended up losing but it wasn’t for lack of effort. There were huge hits. There were remarkable displays of athleticism I’ve never seen before. And there was even a black guy on the ice. No, really. San Jose has a black guy on their team. How cool is that?


Six hours later the game had ended. My wife and dog were asleep. I was trading text messages with a few other hockey fans out there. Sure, they lost, but I was excited to witness such an epic event. Before I went to bed I got one last text. It was from my little brother. A non-hockey fan who I also duped into watching the game.


*Pacman Jones just put his house up for sale in Franklin, Tennessee. It’s described as a 30-acre spread with a 2-acre lake stocked with fish, two barns, two guest quarters with game rooms and a view of tree-covered hills and farmland. Wait what? Pacman fishes? Isn't that like finding out Peyton Manning has a stripper pole in his basement?

*It took me about 20 minutes to find a halfway decent pic of a hot hockey chick. Stupid sport.

*Oh, a final note. Rumor has it that Ryan Reynolds and Scarlett Johansson are engaged. Discuss. (Thanks Sa)
Posted by Magglio at 1:03 PM

For the last time, CHEERLEADING IS A SPORT!!!!