Indiana Jones and the Quest to Make an Assload of Money 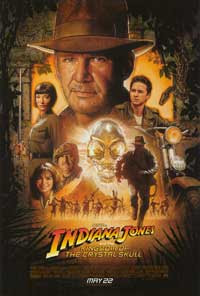 Harrison Ford, George Lucas and Steven Spielberg signed an unprecedented deal with Paramount to make Indy 4. According to this article, the trio agreed to wave all upfront fees for a massive chunk of the profits. Now, that isn’t rare, the big guns like Will Smith, Tom Hanks and Johnny Deep do this all the time – here’s what’s groundbreaking about this deal: Paramount gets to keep the first $400 million – once that threshold is crossed Lucas and the gang will take 87.5 cents of every dollar thereafter. Think about for a second. Indy 4 is poised to be one of the biggest movies of all time – top 25 worldwide is almost definite – meaning that the golden trio have the potential to earn as much as $200 million each.

At first glance, you have to think that the filmmakers are fleecing the studio on this one, but are they? The production budget for Indy 4 was $185 million; let’s tack on another $115 for marketing and distribution, putting Paramount’s total investment at $300 million. That essentially means that Paramount is guaranteed a minimum of $100 million – a pretty nice chunk of change. If the film absolutely flops and maxes out at $500 million worldwide (which is still massive, but would go down as a major bomb given expectations) – the studio would still walk away with $112 million and the three stars with close to $30 each. Everybody wins in this scenario.

What I’m really fascinated to see is whether or not George, Steven and Harrison can all individually make more than the studio (I don’t know how DVDs are split – which will most likely swing things back to Paramount’s favor, but we’ll save that for another time). It isn’t rare for one star to make more than the studio – Tom Cruise used to pull this all the time back in the day – but 3? Now, that’d really be something. A&M will be tracking the numbers for the next few weeks and see how this all plays out. Here’s where we’re out so far: