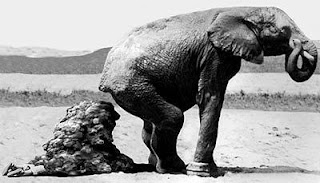 While we won’t have hard numbers until 4pm or so today, here’s what we know so far:

Two things I got wrong:

1.
Indy’s decline in week 2.
I estimated that the fourquel (is that a word? It should be) would drop about 42% and register about $58 million, it looks like it dropped by a much larger margin, roughly 54%, whipping up about $46.

2.
Estimating that Indy would top SATC.
I thought it would be close but that Indy would inch past the four whores, I was wrong. SATC came on strong and pulled in about $10 more. I correctly predicted SATC’s opening (more on that in a second) but whiffed on Indy’s week 2.

Something that I got so ridiculously right that I never want to see anyone questioning me ever again:

$55 million. $55 million! Do you realize that I predicted the exact amount of SATC’s opening?! Are you kidding me? That’s right Anonymous, Anonymous, Only Chick Not Seeing Dumb Slut Movie This Weekend and Mandi, suck it!


Update on Indy’s Quest to make an assload of money:

Last week, I wrote about the groundbreaking deal that Ford, Lucas and Spielberg signed to make Indy 4, here’s the latest update.

Indy 4 vs. SATC. That's exactly like comparing a snow cone to a steaming bowl of hot fudge (that has a hidden, grape sized chunk of mystery shit in it).

One is cold, and tasty, and great on a warm day. It reminds you of when you were a kid, and although there is an occasional brain freeze, it is pure and delicious. BUT, it is a bunch of ice that you paid like $5 for, and that makes it annoying.

The other tastes great. It's warm its chocolaty, and then your tongue touches the shit and there's a moment where you are confused. So you taste some more and get your teeth involved. "Weird," you think, but you are still chewing and licking this nasty piece of shit that you thought was hot fudge. And then you swallow it, trying to convince yourself that what you ate was a really chunky ball of hot fudge. The truth is, you know exactly what you ate. You knew it the moment your tongue touched it and you still ate it.

Then you shit the shit.