Fuck You Panda Will Definitely Mess With the Zohan 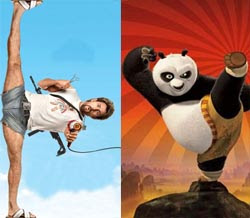 3.
Wah Wah, Big never understands me he doesn’t listen why doesn’t he talk to me I always ask him questions but he never answers he just sits there with this glazed look on his face but not the good glazed like a doughnut I love doughnuts no his glaze is more like the winter 2001 marc Jacobs line member that one the pinks were so bright I thought that a horse had literally kicked me in the uterus which wouldn’t bother Big at all since he thinks my uterus is just a receptacle for his man spoo he is so selfish like that so one sided so obtuse which really got me thinking was dating the new mud puddle and were we all just walking around with golashes not from the water that comes up but from the tears that drop down was the weather channel the new dating channel?
Estimate: $28 million


I was hoping that Fuck You and Zohan would be more of a battle so I could write a side-by-side battle royale-type prediction column like I did last week with Indy and Cunts in the Cunty, but unfortunately the reviews settled this one before it started. Fuck You Panda has a metacritic score of 72 – a fairly high number for a stupid kids movie – which means that it’ll be a big hit. Forget how stupid it looks, how unfunny Jack Black suddenly is, when kids movies get good reviews they blow up.

Because his movies don’t perform well overseas I think we tend to underestimate what a massive star Sandler is at the domestic Box Office, particularly in the opening frame – do you realize that, barring any surprises, Zohan will be Sandler’s 9th movie to open with more than $30 million? That is a mind-boggling number. For example, Eddie Murphy is the biggest box office star in terms of total gross – his movies have made over $3.4 billion – yet only 5 of his movies have opened at +30. Tom Hanks is second on the overall list yet only 3 of his movie have opened at 30 or more. Incredible statistic.
Posted by Casey Lewis at 3:30 PM