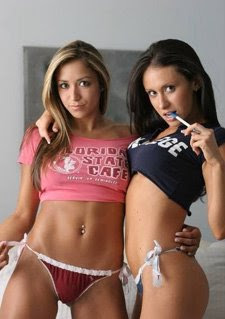 Inspired by the handjobs at TellHimFred I decided to give everyone a quick recap of our Fantasy Football draft this past Monday night. The tough thing about drafting on a Monday night is that you can’t really let loose. Sure, you can sip a Corona and use words only acceptable in a trucker’s diner, but at the end of the night…it’s Tuesday morning. And nobody likes Tuesdays.

(Timeout for a beef jerky break. Fuck I love beef jerkey. Remember at the start of this year when I went vegetarian for a few months. What was I thinking? Damn it that was so gay. If I ever try that shit again somebody had better try and say something. )

So there we were. Myself, Jericho and Patch. Just the guys. Doing guy things. Tecate, a heaping pile of Nachos and a terrible preseason MNF game on the TV in the background. It felt just like an August night should feel. Hope on the horizon but still just kinda sweaty between the legs. This league takes place in Seattle so we have to sign in remotely. This has its pros and cons. Let me explain:


Pro: We don’t have to sit next to Denis. I don’t care if you don’t know Denis, but trust me, you don’t want to sit next to him. Inevitably, no matter where you are, if you sit next to Denis, he starts to get closer and closer to you as the night progresses. And its not like he’s scooting closer to you. No. That would be at least explainable. Denis grows, he overflows, he blubbers outward as the night progresses. I love going to sports events etc with Denis, just as long as I’m not sitting anywhere near him. And yes, his name is spelled Denis. Like Penis. But with a D.


Con: We don’t get to be in the room with the other 8 guys, talking shit, laughing at someone’s pick of Ernest Graham in the 2nd round, encouraging everyone else to keep drinking. Sure, we do the same at our location, but it’s just not the same. Jericho knows all my tricks and all my jokes. Luckily Patch was there and he always thinks I’m funny.


Pro: We get to help each other. I know this sounds weird and totally blasphemous, but it’s nice to be able to bounce ideas and player suggestions off of each other. Now, it got a little tricky when I drew the 1st pick and Jericho the 2nd pick, but we made it work. Also, we made sure to try and pick Patrick Willis at least 5 times which just angered the Seattle guys.

Overall, I’m happy with my draft. I think my starting lineup is pretty solid, especially for a 12-team league. My back-ups are totally sketchy; I’m relying on rookie RBs and slap-dick Wrs to get me through the season. Two guys I wanted really badly, Anthony Gonzalez and Santonio Holmes, slipped right away from me both times. I drafted Eddie Royal waaaay too early but Brandon Marshall is hurt and Royal looks like he could be the real deal. If Lee Evans produces this year, and everyone else does what they’re supposed to do…then I got a good chance to compete. And yes, I totally nabbed my man-crush…James Jones.

Jercicho’s team is solid. With Romo and All-Day he’s stacked at the top. His team hangs on two players in my opinon; Houshmanzadeh and Felix Jones. If Housh can produce another 100 reception season and Felix can get enough touches, Jericho will be sitting pretty. I love the Chris Cooley pick, I think he’s a bad ass tight end. And secretly, I love the Matt Schaub pick. I think this is the year the Texans finally make the playoffs. Bryant Johnson? That pick was just stupid.

Email ThisBlogThis!Share to TwitterShare to FacebookShare to Pinterest
Labels: yes we're on a jenn sterger kick

Nice job on getting LT, though Lee Evans is an enormous frozen turd. I had him on my roster for two straight years and he did nothing but take up space. Loss-man's not throwing to him this year though...hm.

You had me at Ben Roethlisberger.

Good work on having a better team in your second league (a 12-team league) than you drafted in your first league (a 10-teamer).

Also, Brandon Marshall is not injured. He's suspended. And it just got knocked down to one game.

Check it out! There's a band named after me!!

stay on that jen sterger kick.