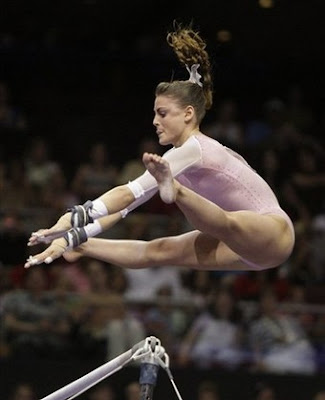 Last night's 4x100 relay
The Olympics are a little like march madness, in that for three weeks you care so, so much about something you ultimately don't care about. And I don't buy the patriotism thing either, I wish I could but when last night's relay was brought to you by Disney's " Beverly Hills Chihuahua" it sorta takes the piss outta the thing. With that said though, last night's race was one of the more exciting finishes I think you'll ever see. Besides, we may not be able to rally around our love for America, but we can definitely rally around our collective hatred for the French.

Jericho: Paris Hilton’s response to the McCain ad
Magglio: I don’t want to write about that one. You write something.
Jericho: You love her though.
Magglio: Yeah, but I had no opinion about that video beyond how smoking hot she looked. Jericho: Cool

Fantasy Football Drafts
Fantasy Football drafts are kind of like getting married on a blind date. you have an idea of what you want and don't want, you hope for the best, but ultimately, regardless of how it all plays out, you're stuck with these fucks for the foreseeable future. I am so excited / terrified for my draft i can barely move.

The US Women’s Gymnastics team
I want to nail ‘em. All of ‘em. Not sure what it is about these chicks. They’re not that cute but there’s just something about how compact they are, those shimmering red unitards and the fact that they could treat me like a pommel horse. I want to nail ‘em all. The big one that looks like a linebacker. The skinny blonde one who’s so serious. The tall one that looks like a Cheshire cat. Hell, even the old lady who speaks broken English and air kisses them on the cheek when they’re done. As long as she wears that little white official Olympic Team USA jumpsuit then I want to nail her too.

Jericho’s two cents: I like how some have boobs and some don't which means the star giggles a little bit for some of them.

President George W. Bush at the Olympics being interviewed by Bob Costas:
I lived in a house with a couple of buddies once and we had the sketchiest landlord of all time. The place was incredible, great view, sick house, but the experience is totally tainted by how fucking skeevy our landlord was. So, anyway, when we were moving out, we cleaned the absolute shit out of the place, knowing that he was just dying to find a hair someplace and dock $500 off our deposit. I cleaned my room like a fucking mad man, not sure if I’ve ever cleaned a place that much before or since. So, I’m the last one there, the house is done, the keys are about to be dropped off. I don't know what came over me, but I went back in, went back to my room and took a piss in my closet. And this is basically Bush's approach to the last 4 months of his presidency. He's smirking and doing that weird laugh where only his shoulders move and saying, "fuck it, you deal with it.”

The 49ers’ quarterback situation
I’m going to save most of my thoughts on this for A&M's annual NFL preview, but I will say this about the Niners, Martz and the QB’s: have you ever seen the devil's own? The Brad Pitt and Harrison Ford cop movie? It's a great premise, Irish mobster in NY is befriended by an old, Irish cop - everything seemed great, except for one thing: Brad Pitt can do Irish accents like I can shit money. Wrong actor in the wrong movie at the wrong time. That basically sums up SF's QB situation, I'll let you guess which QB is Pitt and which QB is Pitt's accent.

Email ThisBlogThis!Share to TwitterShare to FacebookShare to Pinterest
Labels: olympics, t minus your sinus

Screw off! Who do you think you are, comparing the the great J.T. O'Sullivan to a bloody shite Irish accent??!

You're just bitter because my college quarterback is closer to starting than your tosser, the bloody woeful Tuiasosopo.

And yeah, I wouldn't ever want to be stuck with your team either.