And on Sunday, we'll call in Fat Head 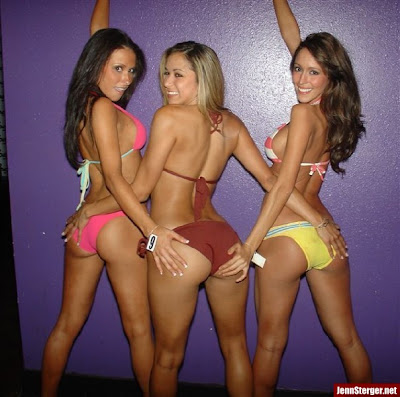 Like throwing up during a tailgate or pulling one off thinking about your childhood babysitter the bachelor party is a true right of passage. And this weekend, our very own Jericho Royall (not to be confused with Eddie Royal) will be embarking on this time honored tradition. Like my bachelor party about a year ago, we will be travelling to Lake Tahoe with 10 sweet dudes and 3 glorious days in front of us. Here are 10 fearless predictions for the weekend.

1. Our friend Josh will win the award for drunkest during the day. And it will be on Sunday, the last day we’re there. And he’ll call his wife and make us all talk to her. And she’ll begrudgingly talk to each of us and we’ll say things to her like “Josh has INSISTED on only Asian strippers. He said he loves the China vagina.” And he’ll get mad and she’ll get embarrassed and it will be a highlight of the weekend.


2. We’ll play poker on Friday night. Jericho hates poker, but we’ll still play. After about 45 minutes Jericho will have moved on to the pool table and we’ll continue with the poker game into the wee hours of the morning. Treek will beat Brett in poker by catching a diamond on the river to make his flush. Damn Treek, that guy always gets his card on the river.


3. I will spend more time on Sunday in the water than out of the water. I will scare beach goers with my offensively pasty complexion. A handful will wonder if I am foreign, a Swede perhaps.


4. Phil, the most unique breed of humans you’ll ever met, will amaze the rest of us by his pure stamina, energy, enthusiasm and charm. If Jim Thorpe, Joey Chestnut and Bea Arthur had a child it would be Phil. He truly is one-of-a-kind. He’s my early vote for weekend MVP.


5. One night we will call Gavin, Mark, Moody and Benny to give them the ‘what for.’ These are four dudes who should be coming with us this weekend but let their labia’s trip them up one way or another in the process.


6. I will put a significant dent into my fifth of Maker’s Mark and will proceed to sing Sublime at the top of my lungs by 11:30pm on Friday night. I will then call my wife, who will kindly ask me to not call her anymore that weekend after the sun has gone down. I’ll call her back within minutes to apologize.


7. Ten of us will show up at our 10pm steakhouse dinner reservation Saturday night. Mysteriously, only 8 of us will be left when the dinner is over. By the time we leave the casino that night to return home, there will only be 6 of us left. Myself, Jericho and Steener will definitely be in the final 6. Evan will be the first to disappear.


8. Jericho will wake up on Saturday afternoon THE most hungover person in the house. It’s just something he does. And this isn’t like glassy eyes, headache, grumpy hungover. No, this is a “won’t get out of bed until 4pm, won’t eat anything until 8pm, and won’t crack a beer until 8:01pm” type of hungover. This I would bet the farm on. I’d also bet the farm on Warren wearing those gay little plaid shorts he loves so much. He got them from LL Bean I think.


(This one isn’t a prediction. It’s just a topical gripe. Here’s a new rule for the office. No John Mayer can be played. Never, ever. There is nothing cool about John Mayer. Not his music, not his haircut, not his boyish charm. Play him at home when you’re lactating and watching Dr. Phil by your lonesome but not in the workplace, it’s inappropriate.)


9. I will shotgun a beer before noon on Sunday and be totally impressed with my finish time. I will then get a bit too excited and challenge other people to various contests for shot gunning and/or pounding beers. This will end quickly for me but will help make list item number 1 come true.


10. I will try my hardest not to be stuck in the room with bunk beds but will inevitably wind up on the top bunk for at least one night. Don will insist on having a bunk bed for the entire weekend. Listen, I hate bunk beds. I’ve never liked them. Ever since I was 10-years old and sat on the edge of the top bunk in my room with my brother while it came crashing down. It scared us half to death. Since then I’ve avoided bunk beds like the devil avoids Kurt Warner.
Posted by Magglio at 2:52 PM

Email ThisBlogThis!Share to TwitterShare to FacebookShare to Pinterest
Labels: tahoe

This bachelor party is like my balls...beautiful and a really big deal.

After the bachelor party is over, the Tahoe house will be just like Josh's asshole...ten guys would have been inside it.

I don't think I'll be the first to disappear, in fact, I think I'm going to drink a bunch of you vagina's under the table.


Your guys blog has the word "moustache" in it but you guys were too puss to grow one for the competition. For shame.

Magglio, you have to tell the rest of the story. Immediately following the crash of your bunkbed, you ran because you were scared, bumped into the wall and broke your foot. Life 1, Magglio 0.

Oh and I believe Warren's wife bought him those plaid shorts.

Daytime drinking is awesome. What better way to spend a. . .