Thank You, Fuck You 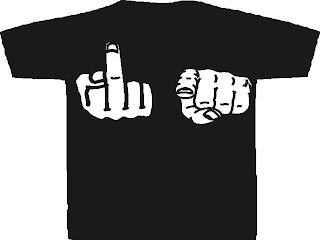 As you’ll have noted from Magglio’s post on Wednesday, it’s been an up and down week. On the plus side, the Olympics are starting, the bullshit Favre saga is over and the Dark Knight is tearing up the box office like a priest at a Boy Scout camp. On the other hand, I’ve been working on a massive document this week that hit its 40th page yesterday – 40th! – I set a new personal record by working until 11pm last night and, as Magglio mentioned, I got attacked by fucking bees. What the fuck!? There are bees in San Francisco?! Goddamn fucking bees, why haven’t we killed them yet? Why do we still have bugs on this planet? Can someone answer that for me please? Let me get this straight, we can solve a crime with a fucking toe hair, we can make square, seedless watermelons, but we still have mosquitoes? How the fuck does that make sense?

Anyway, here’s a few things I’m thankful and god-awfully pissed about this week:

Let me explain. So, there’s this family with the last name Cicle. There’s the dad, Pops Cicle and his hyperactive, non-stop wife named Motor. They have three kids, two girls and a boy. The first daughter dates both men and women and her name is Bi Cicle, the other daughter had a drug problem and a tattoo on her forearm that reads “I’ll do anything once” – her name is Try Cicle. The boy, who has this annoying habit of repeating everything back to you, is named is Re Cicle and he has an annoying habit of repeating everything. So anyway, the Cicle family went to see Taxi Driver, the movie with Travis Bickle, but rather than popcorn they got a pickle, and while they were tickled when Bickle rescued the girl, they all wished he’s put down the gun and use a sickle.

You played the Favre situation perfectly and absolutely knocked the trade out of the park. I like Favre and enjoy watching him play, I mean after all, he’s like a kid out there! But I’ve been on Green Bay’s side 100000% since this shit started. Favre held them hostage every singe year, flirting with retirement and deciding later and later each year if he would come back. How can you blame the organization for pushing him to make his decision earlier? Switching QBs is the hardest move in sports – it completely changes the personality and identity of your entire team. And yes, Favre made hundreds of millions of dollars for the team and the city, I respect that, but he also made a few hundred himself, so I don’t think the organization “owes him” squat. You do everything you can to honor your legends, but not at the expense of the team and the season. Congrats, GB, you played this fucking perfectly, getting a 3rd and maybe a 2nd rd pick for someone that was never going to play for your franchise again is like having a girl that you secretly hate break up with you and then give you seven amazing porns as a parting gift. Fucking score!

You know what pisses me off? When doctors suggest performing a treatment and then get miffed when you ask them how much it costs. Fuck you, lab coat, yeah you went to a lot of school, yes you’re serving the “greater good” whatever the fuck that means, but at the end of the day all you’re doing is providing a service. You’re a glorified refrigerator repairman, you fuck! “Well, I don’t know, you’ll have to ask someone at the desk about that.” Fuck off! Don’t propose something you don’t know how everything about, that’s like a waiter getting pissy and saying, “I obviously wouldn’t know about that, you’ll have to ask someone in the check-making department.” And another thing, why do I have to take my pants off? You take your fucking pants off!

For completing obliterating almost every box office record in existence. Un fucking believable. The Dark Knight crossed the $400 million marker in 18 days, completely horse fucking the previous record, Shrek 2 passing the mark in 43 days. 43! OK, OK, where do we go from here? #2 overall is all but locked up, can it challenge Titanic’s $600? 10 days ago I would’ve said no chance, but I’m starting to alter my thinking here a bit. On it’s current pace, The Dark Knight should top out somewhere between $485-$515, good for second place but still well short of Titanic’s mark. Here’s the wild card though: The Oscars. The movie is well-reviewed enough, respected enough and making enough money (don’t discount the box office’s sway on the voters) that it has a very realistic chance of being the first comic book movie nominated for Best Pic. If this happens and the movie can get a second wave it is very, very possible that it surpasses Titanic. Is this great or what?

For attacking Georgia. Hot-lanta, Savannah, OutKast, Greg Maddux, Calvin Johnson, Otis Nixon, Terry Pendleton, what the fuck did the Peach State do to you? That Cold War thing was one thing, but Georgia? Why the hell would you – what’s that? Say that again? Oh, they’re attacking Georgia the country? Well, shit! Why didn’t you say so? Knock yourself out, Russia!

For introducing the phrase “platonic baby-making partner” into the lexicon. Now that, my friends, is the greatest indie band name of all time.

For ruining the American’s chance at a gold medal in men’s gymnastics. Man, both brothers go down a week apart from each other that is fucking heartbreaking. In other news Hamm pulling out with a hamstring injury has officially replaced German luger Eberhard Kotinzipper having to miss the ’92 winter games after he zipped up too fast and cut the tip off his englehorn, as the most ironic Olympics injury of all time.

For just being so smoking hot. I can still remember being 13, seeing this for the first time and actually hearing my dick say, “hey, why don’t you go to your room and pull on me really hard 500 times?” Flash forward 15 years later and you are still one of the hottest birds around. Thanks!

Fuck You, Sisterhood of the Traveling Pants 2

For just being so goddamn dumb. Let’s forget that this story revolves around 4 girls who share a pair of jeans that magically fits them all. This has to be the worst title of all time, am I wrong? That’s really the best they could come up with? Gross, dude. This isn’t even shit, it's worse than shit, it’s the shit that your shit shits out. I mean, if your shit could shit, it would shit this shit. Right?

For helping me to stop fantasizing about Miley Cyrus, which always made me feel sick and weird, but you three, with your well-washed hair and irreverent vests, I want to put on same Hanson, line you up like little scoops of ice cream and nail you until I pull something. I feel great about this fantasy, thanks guys!
Posted by Casey Lewis at 9:49 AM

Email ThisBlogThis!Share to TwitterShare to FacebookShare to Pinterest
Labels: fuck you, Thank You

im still laughing from the jonas bros line. you jericho, are as good as it gets.