5 Things I Want to See Happen on Draft Day 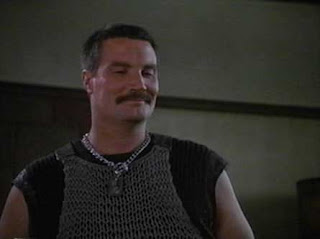 Like the rest of you, I was stunned, flabbergasted even, when Cincy turned down Washington’s offer of a first rounder this year (# 21) and next, which seems like a pretty fair shake for a player that will never play for your franchise again. Cincy isn’t dumb enough to think they can get Chad to change his mind, so they must be holding out for a better deal. Well, here’s one. Basically this trade is the #46 for the #19, b/c both of the players want out and are essentially all but gone. Cincy fills a major hole in their defense and suddenly has two picks in the top 20, Philly adds a much needed vertical weapon. The one possible deal breaker would be, is Donovan ready to deal with another uber-talented but mercurial WR? After throwing to Reggie Brown, Hank Baskett and Kevin Curtis for the last two years, I say yes.

2.
Atlanta waits until the top of rd 2 to take a QB

Here’s the list of good QBs taken in the top 5 since 1995: Eli, Carson, McNabb, McNair, Peyton and kind of Philip Rivers. That’s 5 and ½ quality, Pro Bowl QB-caliber signal callers taken in the last 12 drafts. Ouch. Look, when you’re shitty, you can’t take chances. Atlanta is fucking dog shit. Now that they’ve traded their only good player, D Hall, they’re even worse, they’re dog shit that another dog ate and then shit out again. When you get to this point you need to draft solid, proven players, maybe they’re not flashy and maybe they won’t sell as many jerseys right away, but they provide the foundation to take a few chances, sign a few big names and climb back to respectability. Maybe Matt Ryan is the next Carson Palmer, maybe he’s the next David Carr, obviously there’s no way to know, but if I’m Atlanta I let him pass by, take Dorsey or Chris Long and then see who falls to me at #34. One of the tier-2 guys – Brohm, Flacco and Henne (who I like in that order, btw) will be there.

Here’s a sneak preview of a post you’ll see from me before the NFL season starts: 4,932 reasons why the Mike Martz era in SF will be a goat fucking disaster and 1 reason why it might work. I hate this hiring on every single level possible, the wrong guy for the wrong team with the wrong QB in the wrong city. When the hiring was announced the conventional wisdom was that SF needed to load up on WRs to give Martz as many weapons as possible. I disagree with this entirely. If Martz’s offense has shown anything it’s the ability to make stars out of guys like Mike Furrey and Kevin Curtis, so he’ll do just fine with Jason Hill and Arnaz Battle. The real thing here is protection. Martz’s system calls for 3-4 and sometimes 5-6 receivers at one time, leaving the o-line and maybe an H-back or TE to handle any blitz, which puts a major, major precedence on the line being able to protect. The Niners drafted Staley last year and he looks like the real deal, they need to add another quality tackle to bookend the line and besides, when is adding a guy named Gosder a bad idea?

(P.S. the SF era will officially close the "Martz as a genius" era. He was the leader of a once in a lifetime offense, but look how good those players were. Holt, Bruce, Faulk and Pace in their primes, four first ballot HOFers, not many offenses can say that. You always hear things like "but Martz got the best out of Faulk!" It's Marshall Faulking Faulk! One of the top 5 all time RBs, of course he got the best out of him! That's like calling Michael Bay one of the greatest directors of all time b/c he made Megan Fox look hot in Transformers. It's Megan Foxing Fox!)

4.
Giants trade Jeremy Shockey to the Saints for their second rd pick (#40)

It’s time to end the Shockey era in NY, they got hot when he went down and won the SB while he was in a box drinking beers with guys named Ax and Dizz. Shockey still has some value and on the right team (i.e., a team where he won’t have to block at all, but will basically be a #2 WR masquerading as a TE), can still split the seams and move the chains. His stats have declined every year from his rookie season, but guess what? Guess who his offensive coordinator was when he had his breakout year? Yup, the pudgy guy in the visor who looks like he should be driving a school bus who’s now the head coach of the Saints. He’s the perfect fit on that team and would have a huge year. The Giants can use #40 to draft a DB or OLB.

Wouldn’t that be incredible? The Jets take someone like Gholston at #6 and then the Pats counter by taking him again at #7. This might result in Roger Goodell’s first recorded smile and would definitely make Mel Kiper’s head explode in a river of hair gel and 40 times. Basically the Pats approach to this draft and every draft is exactly the same, “we’re so good we don’t need any of these fucks! So fuck them and fuck you too!” Which of course is countered by Mangini’s approach, “Be vewwy, vewwy quiet...I'm hunting wabbits! I’ll get you, whascally Bewwachick.” Would be amazing when they cut to the Pats war room and everyone is laughing and flipping off the camera. God I hate both of these teams. Is there a stupider rivalry in sports than this one? It’s like the last scene in Commando when Arnold fights that Australian dude in the S&M vest, except both of these teams are the Australian dude in the S&M vest.

Email ThisBlogThis!Share to TwitterShare to FacebookShare to Pinterest
Labels: nfl

If the Pats are Bennett, then the 'Niners are that creepy short guy with the yellow Porsche.