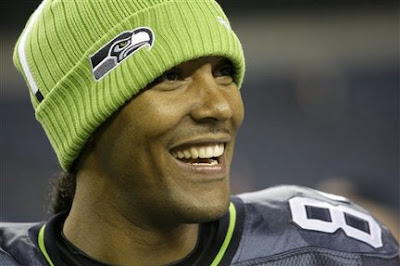 Dear Housh, or as you shall be referred to for the rest of my life: Cock-Sucking Pig-Fucking Worthless Cunt-Sucking Piece of shit,

Fuck you, you fucking pile of dog shit. This is what we're paying $8 million a year for?!?! 14 fucking yards against the fucking Rams! Here's a list of people that could get at least 40 yards against the Rams:

Yes, most of the people on the list don't have the slightest bit of athletic ability. Yes, most are women and a lot of them are dead, but if we put these odds up in Vegas, we'd all win money betting against your dumb fucking ass.

"It's not my fault. It's the play calling. Hasselbeck isn't looking my way. We take what the defense gives us. I'm just running the plays they call."

You do blind rage like no one else. I don't even know who this guy is, but if I were him I would be sitting in the corner shaking, crying into my jersey, and begging to return to the safety and warmth of my mother's womb. Or the sweet release of death. Well played, sir.