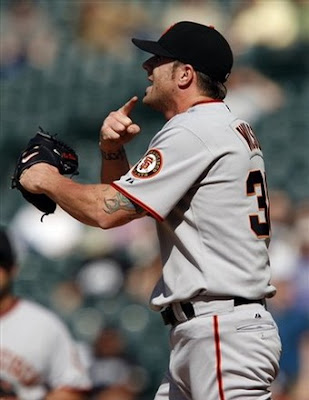 Apple
This Sunday is Bay 2 Breakers. For those of you who know what this is, then you know the madness that is about to ensue. For those of you that don’t, let me see if I can provide some insight using only 10 words. San Fancisco, Walk/Run/Race, Booze, Nudity, Floats, Costumes, Peeing in Public, TahoeSanta, One-of-a-kind, best day of the year. Yep, that about sums it up. Choosing the right outfit is critical. I’m deciding between head-to-toe spandex, a full Giants uniform or dressing as Dora the Explorer. And Tahoe, I am more excited to see you than the sloppy bitches on Biggest Loser when they finally give into their temptations and decide to actually eat the Twinkie. You’re my Twinkie Tahoe. And I will eat you whole.


Moustache
I can’t wait for Casey Blake to get a big fat fucking fastball in his pussy. After hitting a game-tying home run off of Brian Wilson in the 12th inning Sunday, Blake got back to the dugout and mocked the hand gesture Wilson does after completing a save. Of course the gesture he makes is a tribute to God and to Wilson’s late father. Whoops. Casey Blake has a 99mph fastball to the jaw in his future. Which brings me to my next point. Have I ever been such a fan of an outright, holy rolling, Jesus humping athlete? Usually I roll my eyes and am immediately turned off when an athlete drops the JC bomb, but Wilson is different. He doesn’t preach. His faith is blatant but he’s not all up in my business about it. And you know what? He’s a fucking lunatic. Mohawk, tattoos, straight talk, no bullshit. I like this guy. He’s exactly what we need as a save man. He may have even cracked my top 5 favorite Giants on this year’s squad.


Apple
You know who's hot? Leighton Meester. And since we no longer post pictures of hot chicks I’ll just have to link to them here. (On a side note…why are you putting up with this? Look, I can’t say anything because I’m “affiliated” with the site. But you can. You’re the reader. Power to the people. Nobody reading this wants to look at Brian Wilson’s dumb face. Start a mutiny! Riot. Break things! Send letters to your local elected officials! Bring back the sweet tits on A&M!)


Moustache
Just an observation. Whenever you see a chick bring her purse with her into the bathroom it means she’s about to get up in it. It’s the equivalent of seeing a guy walking into the bathroom with some wet wipes and the Lifestyle section of the newspaper.


Apple
In case you haven’t noticed, our friend Jericho is ridiculously ridiculous in his ability to predict box office numbers. The only problem is there’s nothing to do with this talent. We can’t make millions from his knowledge. We can’t go on a game show and have him take home the grand prize. Hell, it’s even difficult to work the info into a cocktail party conversation…”You know, I have an inkling Wolverine will make roughly 70% less than it did opening weekend.” See? Not that cool. Well, I guess it’s just our little secret then. I know I’m not alone when I say I definitely want him to continue predicting box office numbers and giving us his thoughts/insights. But the first reader who can figure out a way to monetize Jericho’s freakish talent wins a lap dance from Caity.

Email ThisBlogThis!Share to TwitterShare to FacebookShare to Pinterest
Labels: be bop bop be da bop

Yeah, why have the sweet pics of the ladies disappeared lately?

I may have to start looking for new irreverent insight from two guys that like to predict the gross revenues for movies, propose NFL Draft trades that are clearly slanted towards their favorite West Coast teams, discuss medical experiences that center around an ultra-sound of their testicles, or the pains of moving from one place to another in the same city.....Whaaaaahhhhhh!

I mean, those kinds of blogs are all over the place.....Let's get it together.....Bring back the hot broads!

Just so you know, everything checked out with my balls A-OK. I do continue to check them daily however. Safety first!

Hey Blake, how'd you like losing the game by two runs (not to mention the series) after your precious home run? Dick.

give me jessica simpson pussy, or give me death...that's how the saying goes right?

Behold the pale horse, for the man who sat on him was death...

And hell followed with him.

Fucking Scat Man! I told you it would be stuck in your head.

You say your balls are still operational, but you can't give us hot chicks?

I voted for Obama in November. I vote for hot chick pictures today.