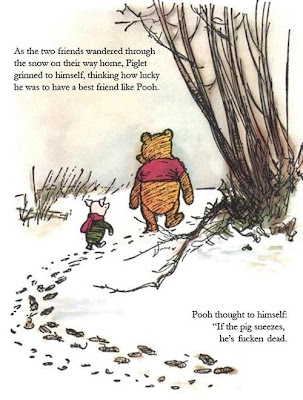 Apple
Crusty Republican Arlen Specter announcing he’s switching parties and joining the Democrats is analogous to Anne Heche’s move to the other side of the plate in every conceivable way. An ill-fated, desperate attempt at relevance that no one will care about it in 5 days. After all, if fake lesbians and attention-seeking Republicans have taught us anything, it’s that they all come back to the dick in the end.


Moustache
I just witnessed the following exchange on CNN about Swine Flu:

Blitzer: Dr. Gupta, knowing what we now know about the spread of Swine Flu, is it time to declare a state of total anarchy? In other words, should the citizens of the world start bashing each other’s heads open and feasting on the goo inside?

Gupta: Yes, Wolf, yes they should.

Basically, his work can be broken down as follows:

Shit Fucking Awful Movies:
Ghosts of Girlfriends Past, Surfer Dude, Fool's Gold, We Are Marshall, Failure to Launch, Two for the Money, Sahara, How to Lose a Guy in 10 Days, Reign of Fire, Frailty, The Wedding Planner, Edtv, The Newton Boys, Amistad, The Return of the Texas Chainsaw Massacre

Kinda Good Movies That Get Worse The More You Watch Them:
U-571, Contact, A Time to Kill

Good Movies That He Has A Tiny Part In And Therefore Doesn’t Get Credit For:
Tropic Thunder, Thirteen Conversations About One Thing, Dazed and Confused

Crazy list, huh? Not that I expected to find any diamonds in the rough, but I really had no idea it was that bad. I think we all agree that McConaughey is “A” list, right? Have you ever seen a worse list for an A list star? Say what you will about guys like Keanu or Nicolas Cage, but at least you can find a Point Break or a Raising Arizona on their IMBD pages. The funny thing? McConaughey’s still cool as shit; his movie sure do steam though.


Moustache
Fuck the Kentucky Derby. Fuck anyone who writes more than five words about Brett Favre (including myself). Fuck anyone in the United States wearing a surgical mask. Fuck the Wizard of Oz. Fuck PowerPoint. Fuck the new Star Trek movie. Fuck PDFs, JPGs, TIFFs and multi-purpose printers. Fuck hockey. Fuck the BCS. Fuck the UN, NATO, Chapter 11, Windows 7, Chrysler and Netbooks. Fuck NASA, the CDC and any office building that has a separate bin for composting (yes, we have one). Fuck The Wall Street Journal, The USA Today and The New York Times. Fuck the Lohan girls (seriously, fuck them both and tape it please). Fuck the penis, the vagina and surrogate mothers. Fuck ESPN the magazine, Scott’s Pelt’s glasses and Pedro Gomez or “el vagine” as he’s known on ESPN Deportes. Fuck cactuses, porcupines and Baja Fresh. Fuck business lunches, cab drivers that don’t drive 80 mph at all times and peanut butter. Fuck Prince, The Madison Square Garden, Dr. J and Casio watches. Oh yeah, and fuck this post. I’m out.

All I can really say is...the Kentucky Derby is so classy it hurts, and I would have Prince's abortion.

Anonymous needs to include a set up or a name when he/she posts. Warm it up a little before you ram it home.

Since when does Jericho have such a sandy vag?

That http thing is the address to a website, dipshit.

You copy it and paste it into that little rectangular bar at the top of your computer tv doohickey.

Also, it's the internet- get used to anonymity.

It doesn't matter if I'm using it to discretely hook up with your mom on craigslist, blogging under the pseudonyms of magglio or jericho, or commenting as anonymous...it's all the same.

Got any hot picks for the Derby tomorrow?

Those are all pretty heavily favored. My long shot big money pick would be Advice.
Track will be sloppy so it could be anyone's race. What is important is that you wear a big hat and get hammered...ENJOY!